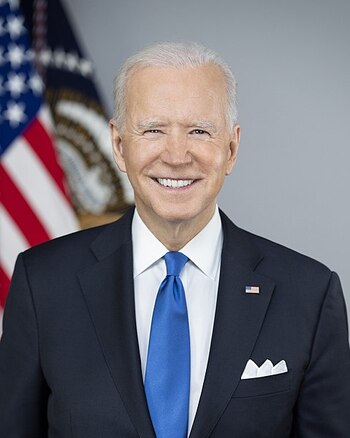 The youngest U.S. senator in 1973, and the oldest U.S. president in 2021. No malarkey, Jack!
"We must rekindle the fire of idealism in our society — for nothing suffocates the promise of America more than unbounded cynicism and indifference. We must reclaim the tradition of community in our society. Only by recognizing that we share a common obligation to one another and to our country can we ever hope to maximize our national or personal potential. We must reassert the oneness of America. America has been and must once again be the seamless web of caring and community."
— Speech announcing his candidacy for the 1988 Democratic Party presidential nomination; June 10, 1987
Advertisement:

Joseph Robinette Biden Jr. (born November 20, 1942 in Scranton, Pennsylvania) is the 46th and current President of the United States, and the seventeenth from the Democratic Party, having been in office since 2021. He succeeded Donald Trump, whom he defeated in a contentious election in 2020, becoming the first candidate to defeat an incumbent president since Bill Clinton beat George H. W. Bush in the 1992 election. Taking the Oath of Office at 78, he is the oldest president to serve, with the previous oldest, Ronald Reagan, having left office just shy of his 78th birthday. He is also only the second Catholic president after John F. Kennedy,note He was also the first Catholic vice president. and the first and likely only person belonging to the Silent Generation (those born between 1928 and 1945) to become President.

Before his presidency, Biden was the Vice President during the administration of the 44th president, Barack Obama. He was elected to that role after serving as a U.S. senator from Delaware from 1973 to 2009 (36 years); at the time of his first election, he was just barely the minimum age to serve (he turned 30 between the election and his inauguration in January). He served six complete six-year terms, including several tenures as chair of important Senate committees, and himself ran unsuccessfully for the Democratic presidential nomination in 1988 and again in 2008, in the second case being picked as Obama's running mate. Biden ran for a seventh term as senator while also running for VP, won both elections, and resigned his Senate seat just before he and Obama were sworn in. Before leaving office, Obama held a conference bestowing upon Biden the Presidential Medal of Freedom, the highest honor available to a civilian, for his five decades of public service.note It was the only Medal of Freedom Obama issued "with distinction".

Those years of service and his established record as a moderate in both politics and temperament set Biden up early on as one of the favorites to run against Trump in 2020, and Trump was impeached twice by a Democratic House (but acquitted by the Senate) for using the president's office to attempt to disrupt first Biden's campaign and then the certification of his election. Biden successfully flipped back the three "Rust Belt" states of Wisconsin, Michigan, and Pennsylvanianote Biden was a favored candidate by Democrats in the 2020 primaries in part because he was born in Pennsylvania. that Trump had flipped in 2016 after having voted for Democrats since at least the beginning of The '90s, plus delivering unexpected (if very narrow) victories in long-solid Republican states Arizona and Georgia. Delays in the vote count and an increase in mail-in voting caused by the COVID-19 Pandemic led Trump and many of his supporters to make unsubstantiated accusations of voter fraud and even storm the Capitol during the election certification, marking only the second non-peaceful transition of presidential power in U.S. history (the first coming after Abraham Lincoln's first election in 1860) and the first time the Confederate battle flag was paraded through the U.S. Capitol. None of these accusations held up in court, and Biden was sworn in on schedule.

Contrary to concerns about Biden's ability to do much as a president, he started his time in office by signing a bevy of executive orders just moments after his inauguration to undo several of Trump's orders (as Trump had done to undo several of Obama's policies), most notably his "Muslim travel ban" and ban on transgender soldiers serving in the US military. Biden was also more publicly active in combatting COVID-19 than his predecessor, openly advocating for compliance with medical guidelines and rolling out vaccines for the disease at a rapid rate that directly contrasted Trump's diffident response. The Biden administration has seen criticism among progressives for continuing the moderate approach of the Obama era, but many have also noted that he has in some ways sought to govern in a more progressive manner than Obama did. Among other things, he reversed controversial Trump immigration policies including the policy of family separation,note Though some critics have blamed this for one of the greatest surges in immigration at the Mexican border seen in decades, a problem that continues to loom over the administration despite the draconian policies of his predecessor. Ironically, Biden initially planned to maintain the U.S.' annual refugee cap on refugees to the all-time low of 15,000 imposed by Trump, before backlash from progressives led him to increase it to 62,500. pledged to withdraw troops from Afghanistan quickly after two decades in the regionnote Though this action has been criticized for allowing the Taliban to take over again and proposed some of the most aggressive infrastructure spending in decades along with other new programs to help Americans recover from the pandemic recession. Most health officials and political analysts have viewed Biden's approach to the pandemic as a marked improvement over Trump's, with America leading the world in vaccine distribution and case numbers and deaths plummeting. By the end of Biden's first 100 days in office, his approval rating had an average of 52%

which, while a major improvement over Trump's consistently sub-50 rating, was also the lowest of any president in the half-century prior that early in a term other than Gerald Ford's, reflecting the increasing partisanship in American politics and the lasting impact of the voter fraud allegations, and in August 2021, Biden's popularity dropped below 50% due to the rise of COVID-19 variants, fears of economic inflation, and the Taliban conquest of Afghanistan weeks after Biden withdrew most American troops while proclaiming that it wouldn't turn into another Vietnam. How the rest of his era will progress is a matter of guesswork at best.

Biden is noted for having a rather bad case of foot-in-mouth syndrome, which naturally makes him a veritable Fountain of Memes in American politics (satirists got a lot of mileage out of his gaffes and playing up his "Mistaken for Racist" moments). He also has a mild stutter which has caused some issues in the past, leading him to speak measuredly to the point of slowly to minimize it, to mixed results. The combination of these two resulted in satirical portrayals of Biden shifting towards that of a possibly ableist portrayal of a borderline (if not outright) senile elder during the 2020 election cycle, popularized by The Onion after it retired its prior Cool Old Guy depiction.

Impressionists have had a hard time portraying Biden, as he doesn't have an especially distinct accentnote Attentive listeners can tell he has the accent from the Delaware Valley/Greater Philadelphia, as appropriate for someone who spent most of his life in general Philly orbit, but it's a very soft accent. or tic (other than maybe "malarkey") they can latch onto, with some satirists after 2020 simply using a generic "old man voice" to parody him.note For example, Jason Sudeikis, who portrayed Biden several times in Saturday Night Live during his vice presidency, while praised for overall capturing the Cool Old Guy image Biden had during this time (at least until the death of his son Beau), was noted as otherwise acting and sounding nothing at all like him. Jimmy Fallon also noted the difficulty of getting the hang of Biden's mannerisms in a behind-the-scenes video

of Fallon imitating Biden on The Tonight Show. By comparison, Bernie Sanders is more animated than Biden—and has a distinctly Brooklyn accent—and is consequently easier to parody for his bombastic speaking style and habit of hunching down while gesticulating toward the camera. Attempts at lampooning Biden for clumsiness took off for a time after he slipped on the steps of Air Force One, but they didn't stick like they did with Gerald Ford.

On a lighter note, he's also known for his love of aviator sunglasses, trains (as a senator he famously didn't move to Washington, D.C. and instead commuted home to Delaware to be with his children and grandchildren), ice cream, and Irish poetry (he read poetry out loud to help overcome his stutter, leading to a lifelong habit of quoting Irish poets in speeches). He's also perhaps the only president to have an actual Sitcom Arch-Nemesis.note Corn Pop

was a bad dude!

Tragically, Biden has endured a number of painful personal losses during his public service. His first wife Neilia and their baby daughter died in a car accident with both their young sons severely injured, shortly after his first election to the Senate in 1972 — nearly leading him to resign before his career got started. Biden himself suffered a nearly-fatal brain aneurysm in 1988, then underwent another surgery for a second one. His older son Beau, a National Guard veteran and Attorney General of Delaware who seemed set to follow in his father's footsteps, died of brain cancer in 2015 towards the end of Biden's tenure as VP (leading him to shelve his tentative plans to run in the 2016 election), and his surviving son Hunter has had long-term struggles with both mental health and substance abuse, with Biden involved in his care and recovery. While Biden is normally seen as fairly mild-mannered, going after his family is certainly not to be advised. Nor is questioning his Catholic faith, being (as previously mentioned) only the second Catholic president after JFK.note This appears to stem from the fact that Biden, like most Democrats, has long been pro-choice, despite the Catholic Church's famously pro-life stance, which has become an endless source for critics of either Biden and/or abortion to decry him as a "no true Catholic". This went to the point that after becoming vice president, there were reports of Biden supposedly being excommunicated, which were later revealed to only amount to the bishops of a couple of churches Biden used to attend denying him communion. The idea of Biden being denied communion arose again after he became president, this time discussed by the United States Conference of Catholic Bishops, but so far no such action has been taken. Regarding Biden's views on the matter, on one incident in 2005, Biden told the Cincinnati Enquirer, "The next Republican that tells me I'm not religious, I'm going to shove my rosary beads down his throat." He did not say that if a Republican ever questioned his faith again, he would shove his rosary beads "up his ass", contrary to widespread reporting of the latter.

over on The Other Wiki.

Tropes associated with Joe Biden in media and portrayals in fiction:

"Wave at the people, Joe."
"Imma point at them!"
"Please Joe just wave"