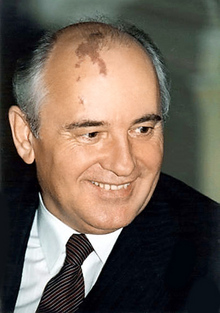 Did somebody say 'birthmarks'? note Maybe "birthmarx", if you're feeling punny.
"I like Mr. Gorbachev. We can do business together."
— Margaret Thatcher in a 1984 interview

Mikhail Sergeyevich Gorbachev (Михаи́л Серге́евич Горбачёв, born 2 March 1931) was the last leader of the USSR. Born to peasants in 1931, he was the only Soviet leader born after Red October, which had a profound effect on how he governed his country.

He joined the CPSU in the days of Nikita Khrushchev, where he was deeply impressed by the efforts to de-Stalinize the USSR. He rose through the ranks rather quickly, using his connections to the party ideologue Mikhail Suslov and a power base in the Komsomol (Communist Youth League). By 1971, he was a member of the Communist Party Central Committee, the highest organ of power in the Soviet Union; at age 40, he was the youngest member of the body.

By The '80s, the damage that Leonid Brezhnev's policies had done to the USSR had become painfully clear. The country was stagnating, technology and production were falling behind the United States, and the always-creaking Soviet bureaucracy had become downright sclerotic. None of this was helped by the succession of ancients who succeeded Brezhnev, Yuri Andropov and Konstantin Chernenko; neither lasted long or left Moscow very often (leading to a famous joke about Brezhnev running on batteries and Andropov needing an outlet).note Another famous joke this period went: Q. What is the difference between the Tsarist regime and the Soviet Union? A. In the days of the Tsar, power passed from father to son. In the Soviet Union, it passes from grandfather to grandfather. Or, Q. Who supports Gorbachev? A. No one supports him: he can walk on his own! On top of that, the few policy decisions that Andropov made tended to exacerbate the problems he had inherited from Brezhnev rather than doing anything to help them, while Chernenko was in such poor health that he barely even did anything at all during his year in office, with most of the important decisions delegated to a troika consisting of Gorbachev, foreign minister Andrei Gromyko, and until his death in late 1984, defense minister Dmitry Ustinov.

After Chernenko's death in March 1985, the CPSU was clearly sick of the stagnation, and the Central Committee put Gorbachev in charge. Gromyko apparently had hopes that he might be able to use the much younger Gorbachev as the same kind of Puppet King he was often accused of making Chernenko into; Gorbachev quickly proved that he was very much his own man by kicking Gromyko upstairs to a ceremonial role, leaving the new leader free to very quickly implement a number of policies known forever by one-word Russian names:

For the most part, Gorbachev's first year in power was relatively uneventful, other than his shuffling out many top-ranking officials who had been in office since the Brezhnev era and replacing them with younger counterparts who were more politically in tune with his ideals. That all changed when the Chernobyl disaster occurred, and Gorbachev found himself being fed misleading reports by those in charge of dealing with the disaster. Naturally he was livid about this, and it caused him to accelerate the pace of his reforms, starting with his making a televised broadcast that could be described as his own version of Khrushchev's "Secret Speech", in which Gorbachev vocally denounced the secrecy, stagnation, and incompetence that had overtaken the nation. In the meantime, the cost of cleaning up Chernobyl would rapidly prove crippling to an already-struggling economy.

On the international front, Gorbachev started meeting with Ronald Reagan in an effort to finally bring the Cold War to an end; they eventually went Karting. He refused to help the other Eastern Bloc governments hold on to power, establishing the so-called "Sinatra Doctrine" (after "My Way"): each socialist country was now free to choose its future. The Soviet Union would not interfere. As a result, the autumn of 1989 saw the Hole in Flag revolutions. Most were peaceful; Romania's wasn't.

Within the Soviet Union, all this change resulted in protests and a general desire for more change. The Baltic States (Lithuania, Latvia, and Estonia) all seceded from the USSR in 1990. At the same time, Gorbachev restructured the government of the Soviet Union, creating the office of President of the Soviet Union to make him Head of State rather than just head of the CPSU; the Congress of People's Deputies was re-established and elected entirely democratically. For a hot second, it looked like the USSR would survive as (gasp!) a democracy with a mixed economy. Weird, eh?

At the same time, however, the Soviet republics all started feeling a bit antsy. Remembering that the Soviet Union was supposed to be a loose federation, the republics decided one by one to declare independence. Finally, Russia, having elected Boris Yeltsin as President, declared independence from the USSR, leaving Gorbachev president of exactly squat. He himself finally resigned (or as he put it, "discontinued his activities as president") on Christmas Day, 1991, marking the official end of the USSR and the Cold War.

Meanwhile, Gorbachev, who mostly sat The '90s out (except for shilling for Pizza Hut), has been trying his hand at politics again; ever since Vladimir Putin came to office, he has become one of the more vocal critics of his administration (particularly Putin's rehabilitation of Josef Stalin, whose rule Gorbachev remembers as the bad old days). He's tried starting three new political parties since 2001; none have really stuck; opposition parties haven't exactly prospered under Putin.

How you feel about Gorbachev seems to depend on where you live. The West tends to be very positive, seeing him as a good man who helped end the Cold War peacefully. The better-off former Communist countries have a more complex opinion, hating him for being the leader of the hated Soviet Union, but also recognizing that it was his policies that allowed them to get to where they are now. In Russia he is generally viewed very negatively, where the days of the USSR are often viewed through a Nostalgia Filter, while the economic turmoil of the 1990s are not. Even Russians who aren't bummed that communism fell tend to view him negatively.

Gorbachev is also famous for the rather large port wine stain birthmark on top of his bald head. These are easily removed, but Gorbachev declined to do so—once he became well-known, it would have seemed vain to have done so. One gets the feeling that he would have gotten nowhere as a politician in America without surgery. Official state portraits of him had his birthmark edited out