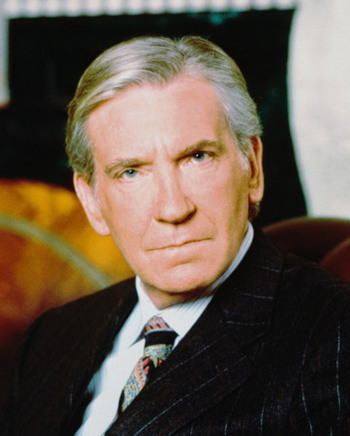 "There were certain young actors I had trained with at the Royal Academy of Dramatic Art who had always got the big parts and I was always the spear-carrier. Suddenly the roles were reversed and I couldn't understand why, and nor could they."
Advertisement:

David Hattersley Warner (born July 29, 1941 in Manchester, England) is a British actor and voice actor with a storied career in theatre, television and film.

He has played Hamlet, has been the Doctor... but if you grew up in the '90s, you'll probably recognise his voice as that of at least one Wicked Cultured cartoon supervillain (among other roles). His voice is so distinctive that we could easily rename the Evil Brit in his honour. His acting is the epitome of Cold Ham—he can deliver the hammiest performance you've ever heard without ever, ever, raising his voice.

He famously pulled triple-duty in TRON as Edward Dillinger, his program counterpart Sark, and Big Bad MCP. His performance as Sark heavily influenced Corey Burton's Shockwave voice (so three guesses who got to voice Sark in Kingdom Hearts II).

No relation to the Australian Cricketer of the same name.

Other films he appeared in include A Thousand Kisses Deep, Cast a Deadly Spell, Back to the Secret Garden, The Little Unicorn, My Best Friend is a Vampire and The Last Leprechaun, among many others.