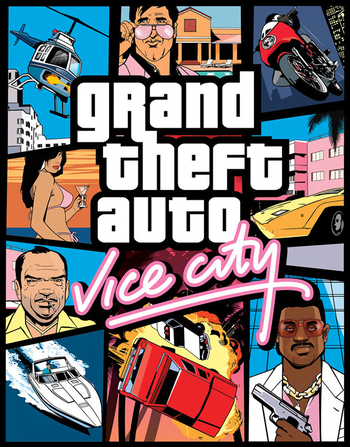 It's all down south, now.
"Sonny, you have my personal assurance that I'm gonna get you your money back, and the drugs, and I'm gonna mail you the dicks of those responsible."
—Tommy Vercetti
Advertisement:

Unlike its predecessor, Vice City features a full-fledged protagonist in "The Harwood Butcher" Tommy Vercetti, who has just finished spending fifteen years in jail for killing eleven people during a job to assassinate one man in the neighborhood of Harwood. The Forelli mob family knows Tommy will cause more trouble if they allow him to roam Liberty City unchecked, so they send him down to Florida's Vice City to keep him out of the way — and to help the family get into the new "businesses" growing there.

Things don't go well on Tommy's first job, though: one of Vice City's mob bosses betrays him, he loses all of his money (and the cocaine he intended to purchase with it), and Sonny Forelli starts breathing down his neck for the failure. Tommy decides to get even with everyone who set him up — and sets out to carve a criminal empire for himself in the process.

Since Vice City takes place in 1986, Rockstar did its best to capture the look and feel of that time — or, at least, how it looked in Miami Vice. It helps that the game had a killer '80s soundtrack to go with it.

The game was originally released on October 27th, 2002 for the PlayStation 2, and on PC and Xbox the following year. It then got released on mobile devices on December 12th, 2012 as part of its 10th anniversary. On October 8th, 2021, It was announced that Vice City would see a Compilation Rerelease alongside Grand Theft Auto III and Grand Theft Auto: San Andreas for PlayStation 5, PlayStation 4, Xbox Series X|S, Xbox One, and Nintendo Switch as part of the 20th anniversary of Grand Theft Auto III, with a version for mobile devices planned for the first half of 2022.