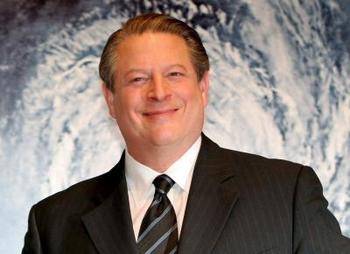 He didn't invent the Internet,
but he wrote the alGOREithm.
"You win some, you lose some. And then there's that little-known third category."
Advertisement:

Albert Arnold "Al" Gore Jr. (born March 31, 1948) was the forty-fifth vice president of the United States, serving under the forty-second President, Bill Clinton, from 1993 to 2001. Before that, he served as U.S. representative for the Nashville area (1977–1985) and then as Tennessee's junior U.S. senator (1985–1993). (He didn't have the same Senate seat that his father and namesake had before him.) In 2000, with Clinton constitutionally ineligible to run for president again, Gore became the Democratic Party's nominee for president, running on a platform that one could sum up as "If it isn't broken, don't fix it" against then-Texas Governor George W. Bush.

To the frustration of Clinton and some of his loyalists, the Gore campaign, instead of attempting to leverage Clinton's popularity and the strong economy and running on the promise of a "third Clinton term," tried to distance itself from the Clinton administration, especially the Monica Lewinsky scandal and what some considered a failure of oversight on Al's part. Gore began from an advantage, as Clinton's approval ratings were still high and the economy was weathering the dot-com bubble, while many saw Bush (son of a former president) as little more than a brand name. That quickly changed over the course of the debates ("They misunderestimated me!"), when Bush successfully took the initiative away from Gore on the issue of Social Security privatization. Bush alleged that S.S. would go bankrupt if left unchecked. While Gore initially refuted this claim, he finally blinked and rolled out the "lockbox" plan, an opaque strategy to say the least. The lockbox was much-parodied and viewed by the electorate as a tacit admission that Bush was right. Unfortunately for Gore's camp, they fumbled the ball again by neglecting key battleground states — including Gore's home turf of Tennessee — which turned Republican despite the assumption that they were in Gore's pocket.

The endgame took place in Florida, whose 25 electoral votes proved decisive. Most television networks initially called the state for Gore on election night, retracted that call, called it for Bush several hours later and then retracted that call.note This disaster resulted in the networks completely changing how they called races, since there was some concern that the initial, incorrect call for Gore might have suppressed turnout in the more conservative Florida panhandle, which is in the Central Time Zone (while the rest of the state is in the Eastern one) and which had polls still open when the networks made their call. Gore, for his part, had called Bush to concede the presidential election, then called back and retracted the concession after it was clear Florida was too close to call. Florida officials spent over a month counting and re-counting ballots to determine who won the state. After a series of legal battles, culminating in a controversial ruling by the US Supreme Court when Bush's campaign sued Gore's, Bush carried the state by 537 votesnote The previous closest race in a deciding state had South Carolina going for Rutherford B. Hayes by 889 votes in 1876. out of nearly six million cast statewide. While Florida became the focus of the legal battles, there were many states Gore could have won, such as his own home state of Tennessee; Clinton's home state, adjacent Arkansas; or even tiny New Hampshire (which Clinton had carried in 1992 and 1996note Previously, the Granite State hadn't voted for a Democratic presidential candidate in consecutive elections since Franklin D. Roosevelt, who carried it in all but his first campaign in 1932. and where Gore lost by 7,211 votes), that would have made him president whatever the outcome in the Sunshine State. Gore lost the Electoral College vote by one of the narrowest margins in American history (just five votes out of 537note Barbara Lett Simmons of Washington, D.C., a Democratic elector pledged to him, abstained as a protest against the capital city having no voting representation in Congress.), but he did win the popular vote by 543,895 votes.

Gore was a famously stiff and uncharismatic politician, but after leaving office he became an unlikely entertainment star. Gore translated his lifetime interest in environmental issues into full-time activism — his work earned him a Nobel Prize and his documentary An Inconvenient Truth won an Academy Award. There were also some concerns that he exaggerated the dangers on some issues (e.g. the "hockey stick" graph), but he got more right than wrong.

In 2006, he was parodied in an episode of South Park in which he insists on warning the residents of South Park about the existence of ManBearPig — a "half man, half bear, and half pig!" The episode ends with Al Gore attaching a cape to himself and pretending to fly off. Twelve years later, South Park aired what was essentially an apology episode where ManBearPig was proven to be very real and very deadly, though Gore himself is still portrayed as egotistical and prissy.

He also did voice work for Futurama (his daughter Kristin was a writer on the show) in a series of amusing, self-deprecating appearances as himself. He founded, co-headed and appeared on the network Current TV until selling it in 2012 to Qatar-based news group Al Jazeera.

No, he did not invent the Internet. No, he didn't say he did.

What he actually said was, "During my service in the United States Congress, I took the initiative in creating the Internet. I took the initiative in moving forward a whole range of initiatives that have proven to be important to our country's economic growth and environmental protection, improvements in our educational system." He was referring to, among other things, a law he authored and convinced his congressional colleagues to pass that expanded access to ARPANET (precursor of today's Internet) to beyond the military and select universities. For what it's worth, Internet pioneers Vint Cerf and Bob Kahn have agreed with his statement, and he can be credited with coining the term "Information Superhighway."

Just for added strangeness, Gore was Tommy Lee Jones' roommate at Harvard. And according to author Erich Segal (who attended Harvard at the same time) the hero of his novel Love Story was based on a fusion of the two of them.

Much like his former running mate Bill Clinton, satirical depictions of Gore in popular culture have given him a surprisingly broad range of comedic personas over the course of his political career. When he was Vice President in the 1990s, they tended to portray him as an overly educated, monotonous-voiced Straw Vulcan, with many Obligatory Jokes about him supposedly being "boring". During the 2000 presidential campaign, he was often portrayed as a serial exaggerator, if not an outright liar — the "created the Internet" controversy was the most famous manifestation of this claim. After he left elected politics and became primarily known for speaking out about climate change in the 2000s, he was often humorously portrayed as a wild-eyed doomsayer ranting about The End of the World as We Know It.