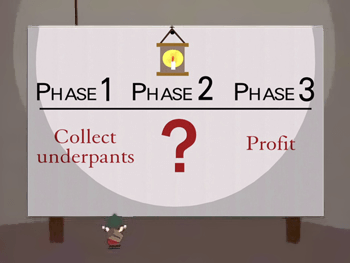 At least it's straightforward.
"We have it all figured out!
Step One: we land the Exodar.
Step Three: we defeat the Legion and go home.
There is only one detail missing...."
— Male draenei joke from World of Warcraft
Advertisement:

A hilariously ill-conceived scheme that lacks the "scheme", or at least a well-thought-out one. Often, it's not even clear how The Plan is supposed to work — but the planner thinks it's such a good idea, it has to work somehow.

The goal can be anything, such as "financial profit," "get the girl," "world domination," and "win." The point is that the plan contains a specific first step and a final step that benefits the planner, but misses a way to connect the two ends.

The implementation of the scheme is sometimes, but not always, ridiculously more expensive than any money they could hope to make on the off-chance the scheme is successful. Sometimes, it just flat out does not make sense — but due to the Unspoken Plan Guarantee, if anyone points this out it will of course succeed without a hitch.

See also Cut Lex Luthor a Check for when the intellect and hard work used to advance the plan would be far more profitable to the character if he just did an honest day's work, rather than work on his Evil Plan. When the character develops the middle steps as he goes along, it becomes an Indy Ploy. If the middle step is unstated and inobvious but becomes clear during implementation, it's an Unspoken Plan Guarantee. Compare also the Slippery Slope Fallacy (which is sort of like "Step three: loss"). Murder the Hypotenuse is an extreme example of "then I get the girl"-style plan. When Steps One and Two are all nice and clear but Step Three (the actual goal) is lacking, see And Then What?.