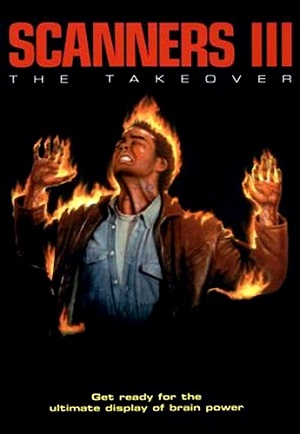 Scanners III: The Takeover is the second sequel to Scanners, released in 1992 and also directed by Christian Duguay.

At a Christmas party in a high rise apartment, scanner Alex Monet shows off his psychic abilities with his best friend. Due to a mishap he accidentally pushes his friend off the balcony with his telekinesis, and goes into self-imposed exile in a Buddhist monastery on the other side of the world.

Back home and months later, his sister Helena is breaking down from the pressure of hearing everyone's thoughts all the time. Alex and Helena's father, a millionaire pharmaceutical businessman and scientist who adopted the two when they were kids, has developed a drug that might help them, Eph 3. The drug is however experimental and possibly dangerous. After a mental episode Helena steals the drug and tests it on herself with success, but the side effects degrade her empathy and turn her into a sociopath bent on domination. After Helena takes control of the company Alex must come back to stop her.