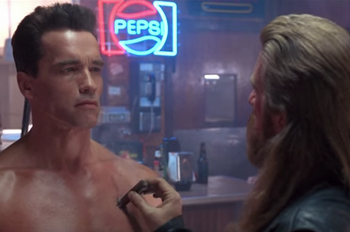 Vanessa: Ever had a cigarette put out on your skin?
Wade Wilson: Where else do you put one out?
— Deadpool (2016)
Advertisement:

Simply put, a smoker decides to put their cigarette or cigar out... on another living person. Sometimes this is used as an improvised weapon in desperate situations, but other times, it is used as a form of torture or abuse, such as a Bad Boss towards an underling. It can also be a sign that the character doing the putting out is a Jerkass or outright bastard. There is also the possibility that it is a form of Macho Masochism or Self-Harm if this is done to oneself.

Before he fights Sly, he crushes his cigar into his own palm. Dude doesn't even blink.

Before he fights Sly, he crushes his cigar into his own palm. Dude doesn't even blink.