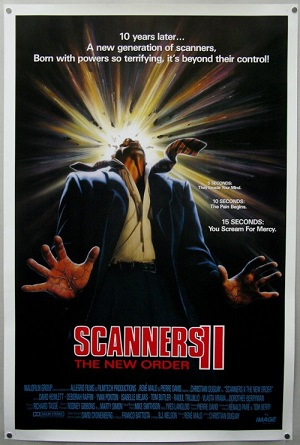 Scanners II: The New Order is a sci-fi horror film from 1990. The first sequel to David Cronenberg's 1981 Scanners, it featured no involvement from Cronenberg or his crew, and was directed by fellow Canadian Christian Duguay.

In an unnamed city, another drifter named Peter Drak (Raoul Trujillo) is introduced howling at the sky in agony and is arrested after he destroys an entire arcade hall using only his mind. He is inducted by police commander Forrester (Yvan Pontom), who runs a covert unit in his department together with the research scientist Doctor Morse (Tom Butler) to gather scanners for the force. However, they are having problems with their subjects becoming addicted to and eventually decaying from the new strand of the Ephemerol drug, Eph 2.

Enter David Kellum (David Hewlett), a medical student preparing to become a vet. David has recently moved into the city from the countryside and has inexplicable trouble adjusting to the city. When he kills a pair of thugs to save his girlfriend, he realizes his scanning potential and is picked up by Forrester. The commander teaches David how to use his powers and to help him fight the crime wave affecting the city, but David soon learns he might have ulterior motives.