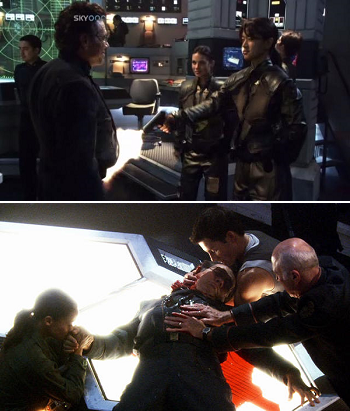 "Fact: The key to any successful cooperative test is trust. And as our data clearly shows, humans cannot be trusted."
— Cave Johnson, Portal 2
Advertisement:

A Team Killer is a person who murders other people on their own team.

If you are a member of a group of people dedicated to doing dangerous work, you're probably depending on the other members of your group to back you up. You might not like them, but you'll trust them at least enough not to shoot you in the back. That way, when they shoot you in the back anyhow, the betrayal just makes it all the more shocking.

Villains might do this to each other for any number of reasons, because villain team-ups are generally unstable things at best. Villainous team-killing is most often done to demonstrate how evil someone is. Heroes normally don't team-kill, or at least believe that they shouldn't, because they depend on The Power of Friendship to bring them through things that would destroy less unified groups.

Played for Drama, a Team Killer is usually a reprehensible person, who everyone despises as a traitor. Team Killing is often a Moral Event Horizon. A pre-emptive strike to stop a party member from doing something despicable is even more tragic. Occasionally Team-killing is depicted as Necessarily Evil, but even then it's nearly always morally ambiguous at best.

Played for Laughs, a Team Killer is either Lethally Stupid, or a comedic sociopath taken to its logical extreme, and chances are pretty good that the Team-Killed deserved it.

The term originates in online multiplayer First-Person Shooter games, where certain adolescents take joy in deliberately killing their team-mates. "What the hell, man? Don't team-kill!" is used as an admonishment to this very day. Team killing tends to earn the ire of server admins as well, which can result in the team killer being kicked and/or banned from the server.

Incidents of it being done on purpose generally involve Unfriendly Fire. A Team-Killer who kills his own employees might be a Bad Boss; see You Have Failed Me and You Have Outlived Your Usefulness for elaboration. In large amounts, it's We Have Reserves.

See Betrayal Tropes for a list of many of the people, reasons, and methods involved in Team Killing. For when Team Killing is done in a strictly meta-videogaming sense, see Griefer or Player Killing.

No real-life examples, please. In real life, the matter of who's on what "team" tends to be a lot less distinct than it is in fiction.