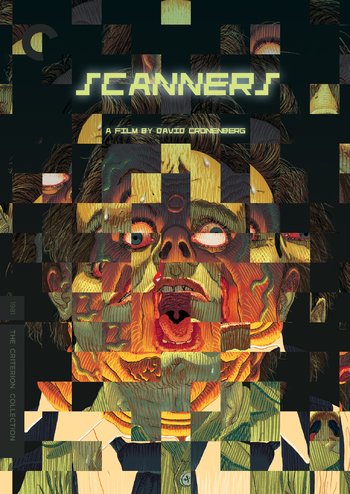 You are 35 years old, Mr. Vale. Why are you such a derelict? Such a piece of human junk? [dramatic pause] The answer's simple. You're a scanner, which you don't realize. And that has been the source of all your agony. But I will show you now that it can be a source of great power.
— Dr. Paul Ruth
Advertisement:

A drifter is arrested at a train station for, somehow, putting a woman into convulsions.

A conference attendee evades arrest for blowing up the speaker's head.

The drifter, Cameron Vale (Stephen Lack), is delivered into the custody of Dr. Paul Ruth (Patrick McGoohan), who informs him that he is a scanner. A scanner is a person born with a derangement of their brain, giving them telepathy. They can "scan" you. Unfortunately, this telepathy is very much of the Blessed with Suck variety: most scanners can hear your thoughts, and can't block them out. They get Psychic Nosebleeds. They can alter your bodily functions. A particularly powerful one, like Big Bad Darryl Revok (Michael Ironside) can blow up your head.

Revok is a psychotic scanner-supremacist who wants to Take Over the World (reportedly, some of the later characterization for Magneto was based on him), and, with his terrorist sect of scanners, probably could. Now the question remains: Is Vale a badder dude than Revok?

Scanners is a 1981 sci-fi thriller written and directed by David Cronenberg, full of the standard Cronenberg trademarks: brilliant special effects, a great Howard Shore score, constant unease, thematic focus on the battle between mind and body, and, of course, generous helpings of Body Horror. By his own account (see Cronenberg on Cronenberg), the movie was a nightmare to work on, however; due to the oddities of the Canadian film industry at the time, he only had a few weeks of pre-production before he had to start shooting without a finished script. His daily schedule consisted of waking up early in the morning to write a few pages, and then film that for the rest of the day, all of it completely out of order. It's an impressive demonstration of Cronenberg's writing skills that the resulting story holds together as well as it does, and the film wound up being his breakout hit.

The movie was followed by a number of Direct to Video continuations: two sequels and two spin-offs. None of these involved Cronenberg or anyone else involved in the production of the first film or follow on from its story (other than a passing reference in the second).

When a ConSec scanner gets volunteer scanner Darryl Revok to join him for a mind scan, the latter overwhelms the former's brain and makes his head explode instead.

Example of:
Your Head A-Splode

When a ConSec scanner gets volunteer scanner Darryl Revok to join him for a mind scan, the latter overwhelms the former's brain and makes his head explode instead.