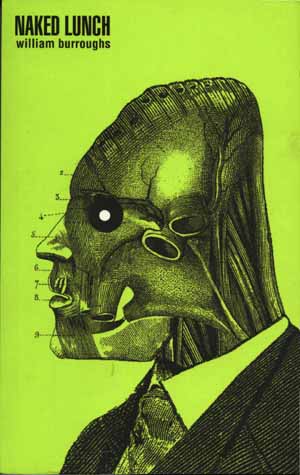 "I can think of at least two things wrong with that title."
— Nelson Muntz, after seeing the movie in "Bart on the Road"
Advertisement:

Hoo boy. How do you describe the 1959 novel Naked Lunch, the seminal work of beat generation author William S. Burroughs, in mere words?

A dystopian sci-fi meets Dante's Inferno, but experienced by a heroin addict in the 1950s. A carnival of everything middle-class America apparently feared at the time: experimental sexuality, drug abuse, foreigners, interracial relations, "forbidden sciences", comic books, gang violence and mob rule. A Take That! against traditional American values and perceived hypocrisies which reads like a collaboration between Allen Ginsberg and Encyclopedia Dramatica.

Some editions of the book include an author's foreword where Burroughs explains the title. The phrase "naked lunch" is meant to describe facing the unvarnished truth about what people do to survive in society — "a frozen moment when everyone sees what is on the end of every fork" — and the specific lunch that Burroughs wanted to unclothe was the custom of capital punishment. He objected to the fact that many people who endorse capital punishment are still reluctant to pull the switch, throw the first stone, or otherwise take on the moral responsibility for the killing of a human being. In a sense, "naked lunch" is the opposite of euphemism. Thus his famous quote, "Let them see what is at the end of that long newspaper spoon." Of course, Burroughs, by his own admission, doesn't remember writing most of the actual text of the book, so the author's foreword could very well be Retcon.

Naked Lunch was very loosely adapted into a film in 1991 by David Cronenberg.