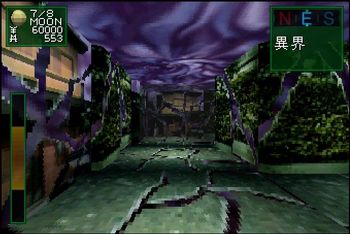 That's not your home anymore.
"America is not a young land: it is old and dirty and evil before the settlers, before the Indians. The evil is there waiting."
— William S. Burroughs, Naked Lunch
Advertisement:

The trope is where a cemetery, temple, forest, etc. is considered holy... to the forces of evil. Whether it was the site of great and terrible crimes, incredible bloodshed, unholy rituals to malevolent beings or other atrocious acts, the very ground itself and any surrounding lands are now cursed. Exact results vary, but the most common are that evil is stronger, good is weaker and things buried here don't stay down for long.

If it's the burial place of some malevolent being, it will also be a Supernaturally Marked Grave. May otherwise be the result of a Leaking Can of Evil, an Unholy Nuke going off, or just because Evil Tainted the Place.

The site may be a Mook Maker for Night of the Living Mooks. If it produces way more zombies than it should, that is a Clown-Car Grave. If the effect covers an entire battlefield, that is a Corpse Land.

When this is a video game level, that's Big Boo's Haunt.