Film / City of the Dead 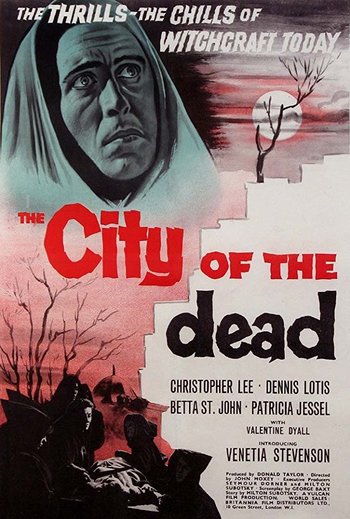 The City of the Dead is a 1960 British horror film directed by John Llewellyn Moxey and starring Christopher Lee.

Professor Alan Driscoll (Lee) teaches the history of witchcraft at a Chicago university. He encourages his star student, Nan Barlow (Venetia Stevenson), to take a field trip to the sleepy village of Whitewood, Massachusetts, the site of a famous 17th-century witch burning. Both Nan's skeptical brother Richard (Dennis Lotis) and her fiancé Bill (Tom Naylor) try to dissuade her from going, but her curiosity is too powerful. After arriving in Whitewood, Nan finds accommodation at the Raven's Inn hotel, run by Mrs. Newless (Patricia Jessel), and plunges headlong into the town's satanic history. Little does she realize that she has been lured to Whitewood for a sinister purpose.