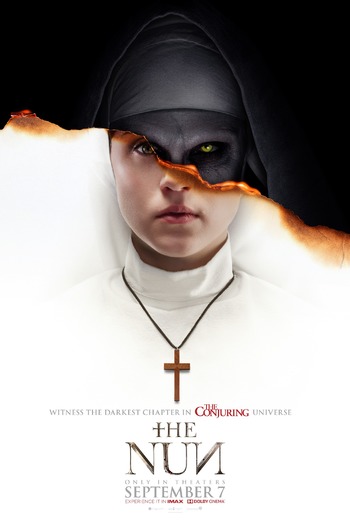 Pray for forgiveness.
Sister Irene: Sister Oana, last night in the chapel, I saw a nun. She was, she felt anything but holy.
Sister Oana: Do you see her too? I've seen her stalking the hallways at night. She looks like us but she is not one of us. It's something unholy.
Advertisement:

The Nun is a supernatural horror film directed by Corin Hardy (The Hallow), produced by Peter Safran and James Wan and written by Gary Dauberman. The fifth film to be set in The Conjuring Universe, it is a Spin-Off and Prequel of The Conjuring 2 and stars Demián Bichir and Taissa Farmiga. It was released on September 7, 2018.

In 1952, the Vatican sends a priest and a novice to investigate the mysterious suicide of a nun in the St. Cârța Abbey, located in the Romanian People's Republic.

Should NOT be confused with this film

. Which has a similar premise and similar title (once you translate it).