Claimed by the Supernatural 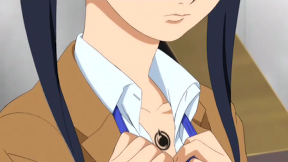 "When you die, your soul will also belong to Hell. You will never know the joys of Heaven; you will be left to wander through a world made of pain and agony for all of eternity."
Sometimes someone will find another person they want. They could be a Love Interest, Lust Object, or pure obsession — or, it may have nothing to do with that and the object of their desire is nothing more than a Living MacGuffin or Phlebotinum Girl. At even further extremes they could genuinely want the character to join their family, or they could want to possess them to Break the Haughty.
Advertisement:

Whatever the motivation, sometimes a character is supernatural enough to make it happen with none of those pesky things like "permission" and "consent".

This can take many forms:

The one wearing the new mark may not be aware of its presence at all, or if they are, may not realize its significance. If they do, don't expect them to be able to do anything about it (or, eventually, to want anything to be done — many marks are insidious like that). Whether the marked one knows about it or not is usually immaterial to the marker; its purpose is plain and simple, and that's to tell everyone "hands off — this one belongs to me".

The intent may not be — and often isn't — actively malicious; an attempt to protect a loved one (or Chosen One) or a bonding is as likely as a curse. Even the benevolent versions, though, are often performed without foreknowledge or permission, as an attempt to protect the marked one from the knowledge or consequences of it. Actually getting that permission and bestowing the mark will often be as solemn and meaningful as a wedding or knighthood ritual, depending on the connotations.

This mark often comes with unwanted side effects, good or bad; these commonly include heightened emotions or sex drive, unwanted physical changes such as a new eye color, enhanced sensitivity to the supernatural, or altered mental state (particularly if their opinion of or behavior toward the one who marked them is changed). Might be used to invoke Synchronization, Mindlink Mates, or More than Mind Control to encourage a reluctant partner. At times it might even backfire — what was intended to be a protection becomes bait that draws in other strong supernaturals who want to steal them from their marker.

Often overlaps with Muggle in Mage Custody, when a mortal becomes a slave, a ward, or an apprentice of a supernatural being. May overlap with Touched by Vorlons or Cursed with Awesome when the claim grants the marked person a power-up or new ability. Inversely a backfiring mark could be Blessed with Suck. May also overlap with Mark of Shame if it was applied against their will or they have since changed their mind, especially if they are a Hunter of Monsters. Compare Slave Collar and Slave Brand for the mundane variations (although they are not mutually exclusive).

Supertrope to Mark of the Beast, which is specifically a mark of an evil force on a fallen character; may overlap with Red Right Hand if the mark is supposed to show the audience that they are (or are thought to be) evil, or with Birthmark of Destiny, though a significant birthmark doesn't have to be supernatural.

Not to be confused with Mark of the Supernatural, which is when a person has a mark that indicates they themselves are supernatural.

Alternative Title(s): Marked By The Supernatural