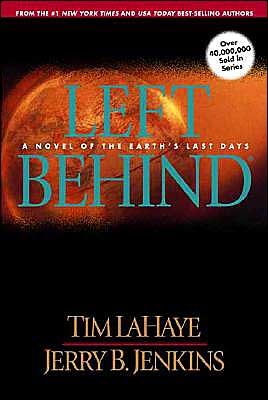 "For the Lord Himself will descend from heaven with a shout, with the voice of an archangel, and with the trumpet of God. And the dead in Christ will rise first. Then we who are alive and remain shall be caught up together with them in the clouds to meet the Lord in the air. And thus we shall always be with the Lord."
— 1 Thessalonians 4:16-17, The Bible
Advertisement:

The one that made the Rapture common knowledge.

While not quite the first — the Christ Clone Trilogy was around earlier, and Salem Kirban's more out-there 666 before that — Left Behind is the Christian End Times series as far as public recognition goes, at least in America. Written over the course of a decade by Tim LaHaye and Jerry Jenkins, Left Behind and its sequels offer a fictionalized version of future history and the dramatic end of the world, as understood by the Premillennial

Christian tradition. 20 Minutes into the Future, millions of Christians suddenly disappear without a trace, as the ancient cosmic war between Good and Evil speeds toward its culmination, and a new regime unlike any other seizes power over the globe. Of those left behind in a world of descending darkness, who will succumb, and who will struggle for the light?

The good guys are a rotating group (due to the inherent high mortality rate associated with living in the End Times and fighting the Prince of Darkness) of 4-5 who call themselves the Tribulation Force. The bad guy is Nicolae Carpathia, The Antichrist, the most evil of all Evil Overlords.

At first, the Tribulation Force consists of: Rayford Steele, the unofficial leader and a pilot who planned on cheating on his wife (Irene) with a flight attendant (Hattie) because of how his wife's preaching annoyed him; Chloe, Ray's college-age daughter; Cameron "Buck" Williams, an adventurous, street savvy newspaper reporter who eventually marries Chloe; and Bruce, the pastor who brings them all together. Thus united, they launch a crusade to convert the world and protect the converts while waiting through seven years of judgments between the Rapture and the Glorious Appearing of Christ at the end of the world.

The completed story sequence includes sixteen novels in all, of which twelve are the main series, chronicling events from the Rapture to the Glorious Appearing. They are followed by a trilogy of prequels (dealing with the birth of the Antichrist and the various signs leading up to the Rapture), as well as the sequel Kingdom Come, which shows the millennial kingdom of Christ on earth and the final battle against Satan and his followers in the far future. (For the individual plot summaries of each of the novels, see the Recap page.) In publishing order, they are:

Additionally, there is Left Behind: The Kids, a Young Adult series spanning forty volumes, which is set in the same continuity and follows a different group of younger protagonists on a quest related to but separate from that of the main Tribulation Force. For a list of the titles in this series, see again the recap page.

Left Behind has also been made into three direct-to-video films, the first of which saw a brief theatrical release the week after the video hit the stores. It's also spun off into graphic novels, a series of young adult novels (with teen protagonists experiencing these events in their own way), and even a PC game, Left Behind: Eternal Forces

who claimed it was incompatible with basic Christian doctrine (on account of all the killing) and that it encouraged religious bigotry. Others disagreed with this, even going so far as to call it malicious misrepresentation, though ultimately the game received mixed reviews.

A reboot film of the first book, Left Behind (2014) was released in theaters on October 3, 2014, directed by Vic Armstrong and starring Nicolas Cage, Cassi Thomson, and Chad Michael Murray. It covers only the first half of the first book, though it expands on that half by making the story an airline disaster film.

Alternative Title(s): Left Behind The Kids