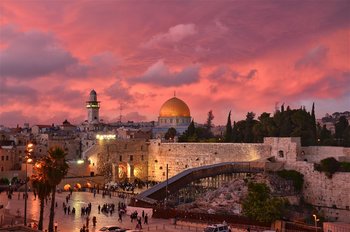 Jersualem of Gold, and of copper and of light / Behold, I am the lyre for all your songs.

If I forget thee, O Jerusalem, let my right hand forget her cunning.
If I do not remember thee, let my tongue cleave to the roof of my mouth
If I prefer not Jerusalem above my chief joy.
—from Psalm 137 in The Bible
Advertisement:

Not a holy city, the Holy City. Since the Bible Times, more prophecies and/or religious pronouncements have directly concerned it than any other location on the planet. Religious and political capital of the State of Israel as well as its largest city, Jerusalem is home to about 800,000 people depending on where your favorite fringe political faction draws the city limits. Everything is built of a very pretty limestone known as Jerusalem Stone so that the New City in Western Jerusalem can match the appearance of the comparatively small Old City.

Known for its wide variety of religious figures, ranging from too many kinds of ultra-Orthodox Jews to describe here to Franciscan monks to robed-and-veiled Sunni Muslim Arabs. Everyone wants to own it, and a fair number of those who don't own it have shown themselves willing to blow bits up to acquire it. As a result the old city is divided into quarters to help keep everyone from doing so; Christian, Jewish, Muslim and Armenian.note Which is basically like a second Christian quarter, but with Armenians. They got their own quarter by moving in a few hundred years before everything got divided up. The Armenians had been immigrating there on pilgrimages since the 5th century, but really established their community and presence in the region during the Crusades. There was also a "Moroccan Quarter", a part of the city adjoining the Muslim and Jewish Quarters inhabited by Moroccan Muslims; it was demolished a few days after the Israeli seizure of the Old City for being too close to the Western Wall and absorbed into the Jewish Quarter. The parts of Jerusalem outside the walls - which are much, much larger than those inside it - are divided into neighborhoods like other cities. Unfortunately for many who want to own Jerusalem, property prices have been driven up by foreigners buying themselves combination vacation-homes and pilgrimage lodges in the form of apartments in some of Jerusalem's better neighborhoods. Thus, particularly in the Armenian and Christian quarters, the populations have been in decline.

Major sites include the Dome of the Rock, where Islam holds Muhammad ascended into heaven, which is also built on the Temple Mount where the Second Temple was built. This is a bit of a issue as that's the holiest site in Judaism.note There have also been incidents of Arab militants hiding weapons in buildings on the Mount, and conducting unregulated construction work that destroyed priceless archaeological artifacts. Dealing with this has mostly been put on hold by a general consensus amongst Ultra-Orthodox rabbis that it would be blasphemous for a Jew who is not a High Priest (a role that has not been fulfilled for millennia) to set foot in the Holy of Holies, and since no one knows for sure which part of the Temple Mount used to be the Holy of Holies, Jews generally satisfy themselves with worshiping at the Kotel/Western Wall/Weeping Wall, an old retaining wall of the Second Temple. The Wall is divided into a men's side and a (much smaller) women's side, and women until very recently were forbidden from wearing prayer shawls, bringing Torahs to the Wall, or praying in non-Orthodox ways, although these restrictions have been lifted as a place for "pluralistic prayer" is being established. Christians have the Church of the Holy Sepulchre, where Jesus was buried before His resurrection. This, too, is divided, as the various Christian churches kept fighting over who could run the church at the site; different pieces of the church are controlled by the Roman Catholic, Eastern Orthodox, Armenian Apostolic, Coptic Orthodox, and Ethiopian Orthodox Churches, with some parts under joint custody. There's still some squabbling about repairs in the common areas—which have to be agreed to by all five of the aforementioned churches—but it's not as bad as in the past: they used to argue about who would get the keys and open the door to the place, a problem eventually solved by Saladin, when he just gave those responsibilities to a pair of Muslim families (responsibilities they execute to this day).

Fun fact: Jerusalem Syndrome is where persons with no previous mental disorders enter the city and proclaims themselves a prophet or Messiah.

Probably one of the few cities on Earth containing shopping malls, walking promenades, and old-style suqat. Speaking of the suqs, cut whatever price someone wants to charge you in half and drive a hard bargain from there, except on food.note Food is considered so vital that overcharging even your worst enemy for it is offensive and a sign of unacceptable behavior. Even a long-bearded Islamic Jihad supporter would refuse to overcharge a hard-right Israeli—even Netanyahu himself—for food items. He might simply refuse to sell at any price, but he would never overcharge.

Despite being a holy city, Jerusalem also has a large, thriving secular population. If you look hard enough, you can find businesses open on the Sabbath, cheeseburgers, and numerous cultural festivals. The city has its own light rail system, and has two terminal stations connecting it to the Israeli railway system, Jerusalem-Malha in the southern outskirtsnote via the old, winding, Ottoman-built Jaffa-Jerusalem railway, which used to extend to the city center but got cut when the railway was refurbished in the early 2000s, and Jerusalem-Yitzhak Navon in the western edge of the city centernote via the new Railway, built in the 2000s and 2010s. Despite being an ordinary passenger line instead of High Speed Rail, it's occasionally called one due to the fact train journeys to Tel Aviv on the new railway last 30 minutes; whereas on the old railway, the train journey lasts two hours, and since the railway is curvy enough to damage modern trains, you have to switch trains mid-way in Beit Shemesh, where the curved section ends. It also contains one of Israel's most prestigious higher education facilities - The Hebrew University of Jerusalem.

By Israeli law, Jerusalem is officially the capital of the State of Israel; the Knesset, note the national legislature; the word literally means "Assembly". President's Office, Prime Minister's Office, Supreme Court, and most government ministries are based in West Jerusalem. However, because Jerusalem was supposed to have been a city under international administration under the United Nations Partition Plan of 1947 (rejected by the Arabs), the international community decided that it would be unseemly to ratify Israel's decision to take the city by force, so all countries continue to maintain their embassies in Tel Aviv.note In the US, some very pro-Israeli Congressmen pushed through legislation in 1995 requiring that the US embassy be moved to Jerusalem by the end of 1999, but allowed the President to delay the move if "national security concerns" required it. Bill Clinton, George W. Bush, and Barack Obama have all availed themselves of this opportunity out of a pragmatic desire to not unnecessarily insult the Palestinians—and an even more pragmatic desire to not spend the money it would take to move the large embassy in Tel Aviv into an increasingly crowded and expensive Jerusalem. Donald Trump committed to moving the US embassy from Tel Aviv to Jerusalem, despite most of the UN voting to condemn him for it. Instead, a small branch of the embassy has been opened in Jerusalem. Additionally, Israeli legislation makes the whole city of Jerusalem the indivisible capital of Israel; this angers Palestinians, who view Jerusalem as the indivisible capital of Palestine, and dismays pragmatic Israelis and foreigners, recognizing that a partition of the city is likely should the two-state solution be enacted. As a result, the statement "Jerusalem is the capital of Israel" is at once completely non-controversial and extremely controversial.