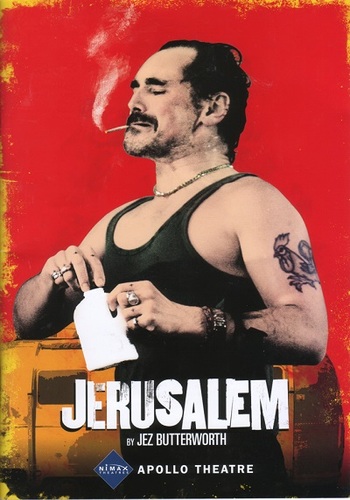 Jerusalem is a critically acclaimed 2009 play by Jez Butterworth, frequently hailed as the most important new play of the 21st century and a seminal classic in the making. Of particular note is the almost universally lauded performance of longtime leading man Mark Rylance, whose profile soared on the strength of his turn as Johnny "Rooster" Byron (some critics went so far as to compare him to Laurence Olivier)
Advertisement:

Johnny Byron, an eccentric ex-daredevil turned hard-drinking, trailer-dwelling hermit, lives in the midst of an idyllic pastoral forest on the outskirts of his small town. He attracts a royal court of misfits and outsiders, including some local teenagers whom he supplies drugs and alcohol. Johnny's drunken antics and drug-peddling make him a bur under the town's saddle and as the play begins a longtime campaign to evict and/or arrest him nears its endgame. At stake is more than just Johnny's wayward lifestyle; developers have an eye on turning his plot of forest into suburban sprawl, as they have most of the surrounding region. On St. George's Day, Johnny makes his last stand, and he and his followers have the chance to learn what they and each other are really made of.

"Jerusalem" premiered at the Royal Court Theatre in London in 2009 to ecstatic reviews before moving to the Apollo Theatre in 2010, where it played until early 2012. For part of 2011 the production left the Apollo to play on Broadway with most of the original cast. In early 2014 a new production opened in San Francisco, the first and so far only wholly American production and the first without Butterworth or Rylance on hand.