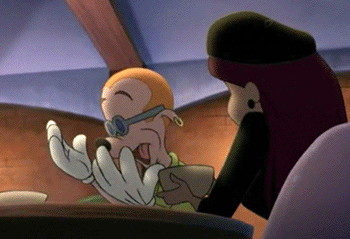 "Do you ever wonder why we're always, like, wearing gloves?"
"They call 'em 'fingers', but I never see them fing!"
— Otto, The Simpsons
Advertisement:

It is common for people undergoing the Mushroom Samba to become fascinated with their own hands, often with lines such as "I can see auras!". Expect their hands to suddenly seem "huge", which may be shorthand for demonstrating the ability of narcotics, especially opioids, to alter spatial perception.

Not the same as contemplating your navel. Common hobby of The Stoner. See also These Hands Have Killed for when a character contemplates their hands for an entirely different reason.