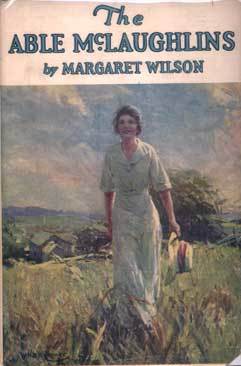 The Able McLaughlins is a 1923 novel by Margaret Wilson.

It's set in a Scottish farming town on the Iowa prairie, in the time right after the end of the American Civil War. Wully McLaughlin, the eldest son of his clan, comes home after escaping from a Confederate prison camp. He meets neighbor girl Chirstie McNair and is bowled over to find that she has grown into a beautiful young woman while he's been away. They kiss passionately out in the tall grass, and when Wully leaves to rejoin his unit he believes that they are engaged.

A few months later the war is over and Wully comes home for good. He is surprised to find Chirstie now behaving towards him with extreme coldness. Eventually Wully stumbles across a terrible secret: Chirstie is pregnant, after being raped by her cousin, town scumbag Peter Keith.

Received a sequel, The Law and the McLaughlins, in 1936.