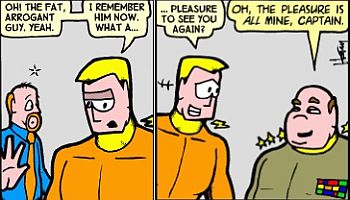 Vaarsuvius: I wish I could properly express my deep sorrow over her passing, but I would first have to FEEL actual sorrow, rather than, for example, mild amusement. As the shrew has perished, we are no longer bound by the anchor that has hung around our neck these last weeks. Let her death ring in a new era of freedom for the "Order of the Stick"!
[beat]
Vaarsuvius: She is, naturally, directly behind me.
Miko: Naturally.
— The Order of the Stick, strip #246

A character decides to vent some pent-up complaints about another character and the subject of their frustrations manages to arrive on the scene just in time to overhear the best parts of it, if not the whole thing.

Exactly what happens next varies, but usually involves one or more of the following:

Engineered Public Confession is an invoked variation of this, and much less likely to be played comedically — e.g. the Big Bad makes his Just Between You and Me confession to his victim just as an authority figure (particularly the authority to arrest/kill him) is getting into earshot.

An obvious variation is Right in Front of Me. Contrast I'm Standing Right Here — where the speaker already knows that the target of their conversation is right there with them — and Bilingual Backfire — when the speaker knows the target is there but thinks they won't understand the language.

In-combat variations No, I Am Behind You and its response Snap to the Side remain popular.

Compare And Here He Comes Now, Bathroom Stall of Overheard Insults, Last-Second Word Swap, "No Peeking!" Request. Note that it can also be used as a basis for tricking someone to Look Behind You. Contrast Oblivious Mockery, when a character mocks some action in front of someone who did it, but without knowing it, "Reason You Suck" Speech, if a character is willing to complain about someone to their face, and Scared of What's Behind You. Finally, see Stealth Hi/Bye for a version that doesn't land anybody in trouble.

Kevin explains to Brad that there are benefits to being quiet, with one of the examples being this trope

Alternative Title(s): Right Behind You

Kevin explains to Brad that there are benefits to being quiet, with one of the examples being this trope