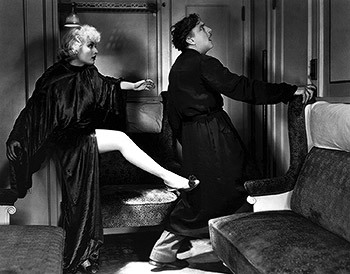 Twentieth Century is a 1934 comedy starring John Barrymore and Carole Lombard and directed by Howard Hawks; although the name could suggest otherwisenote The year this movie was released, there was a 20th Century studio, that the next year will merge with Fox to create 20th Century Fox. The title actually makes reference to a train, this film was produced by Columbia Pictures.

Barrymore plays Oscar Jaffe, a Broadway producer who plucks a lingerie model named Mildred Plotka (Lombard) from obscurity, gives her the stage name Lily Garland, and makes her a star. They fall in love. The film then cuts to three years later, revealing that their relationship has soured due to Jaffe's maniacal jealousy. After Lily catches a private eye hired by Jaffe in the act of monitoring her phone calls, she leaves him, heads out to Hollywood, and makes it big as a film actress. Jaffe's career tanks, but he's given one last chance to rescue his situation when, while riding the train from Chicago to New York, he finds out that Lily is on board the same train.

The last big role for Barrymore, who had been a star since the early silent film days but whose career went into decline due to his alcoholism. On the other hand, a Star-Making Role for Lombard, who would specialize in comic romances like this one, appearing in several classics before her untimely death in a plane crash in 1942. Twentieth Century did poorly at the box office but has since been recognized as helping establish the Screwball Comedy film genre. It was inducted in the National Film Registry in 2011.