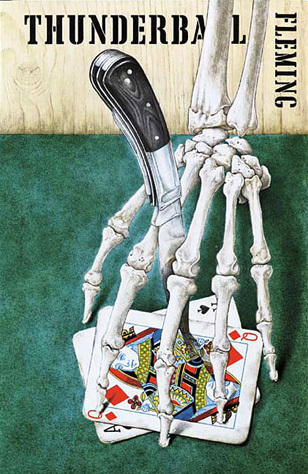 The ninth James Bond book by Ian Fleming, published in 1961.

Criminal organization SPECTRE has stolen two British nukes, and use them to demand a ransom of a hundred million pounds. Bond is send to Bahamas to investigate a possible link to SPECTRE.

The book is notable for being perhaps the first story about terrorists stealing nuclear weapons and holding the world to ransom— a common enough trope in modern spy and action thrillers, but a revolutionary idea at the time. Thats right, folks; James Bond invented nuclear terrorism.

The book was actually the novelization of a screenplay which wasn't adapted into film until 1965. Due to the copyrights involving other writers of the screenplay, several legal battles ensued and the book got another film adaptation in 1983.