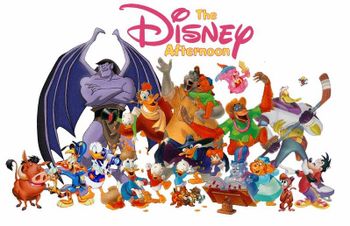 "There's so much to do, getting ready just for you,
Everybody's busy, bringing you a Disney Afternoon!"
Advertisement:

A made-for-syndication programming block featuring many of Disney's original television shows that ran from 1990 until 1999, though some of the shows that aired in the line-up (like Gummi Bears and Chip 'n Dale: Rescue Rangers) aired between 1987 and 1989 and weren't included in the Disney Afternoon line-up until they were syndicated.note Prior to that, Gummi Bears was seen on NBC, then ABC's, Saturday-morning blocks, and Chip 'N Dale Rescue Rangers was on the Disney Channel (then a premium service)

The block was two hours long, consisting of four half-hour shows. The lineup changed after every season, adding a new show to the end of the line up while the first show would be bumped off. Eventually, the block was shortened to ninety minutes in 1997. While the block was a hit, it eventually became impractical when Disney began producing more shows than could be featured in a two-hour block. It ended in 1999, after a successful ten year run (though for the last two years, it didn't have a name besides the internal name "Disney-Kellogg Alliance", as Kellogg's would be a large sponsor), though it did receive a Spiritual Successor in the form of Disney's One Too, which supplanted the remnants of this block and served as a spinoff to One Saturday Morning, airing on UPN stations until 2003.

During its run it spawned an attraction at Disneyland, a soundtrack (still available on iTunes), a comic book published by Marvel, and a series of very good NES video games developed by Capcom (who re-released themnote DuckTales and its sequel, Chip 'n Dale: Rescue Rangers and its sequel, TaleSpin, and Darkwing Duck for PlayStation 4, Xbox One, and Microsoft Windows in 2017 as The Disney Afternoon Collection). It also had a major comic event in Disney Adventures magazine called The Legend of the Chaos God. A couple of shows received revivals in comics: Gargoyles had an all-too-short (and yet too long) comic by Slave Labor Graphics, while Ka BOOM Comics introduced DuckTales (1987) elements in the long-running Uncle Scrooge comics, then launched new series for Darkwing Duck, Chip 'n Dale: Rescue Rangers and DuckTales (1987); though these all ended when Disney bought out Marvel Comics and cut ties with Boom! Studios.

Shows featured on the block, in the order they were featured:

The block is associated with the following tropes: