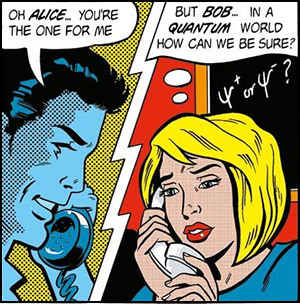 When the interaction between two hypothetical characters is needed to explain or describe some system, they are nearly always called Alice and Bob. Alice and Bob — A and B. This duo originally started out as a standardized way to explain cryptography. Over time, the duo has been adopted in explanations of mathematics, physics, quantum effects, and other arcane places, but has also been seen in fiction.note They are also found in a surprising number of trope definitions. We're trying to get them cleaned out. Feel free to pitch in. This may be a doomed effort since many invocations are potholed to this page.

Where more than two characters are needed, other names are used, such as Carol and Charlie. If the two characters are the same gender, one of their names will be changed to reflect this, such as Alice changing to Alan or Bob changing to Betty. Some names have acquired standard meanings, such as Eve the Eavesdropper. Lists of these can be found in Bruce Schneier's book Applied Cryptography, and at that other wiki.