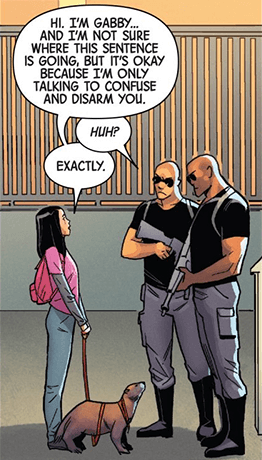 "Now, I had some pretty good coaching last night, and I find that if I yield only for a question or a point of order or a personal privilege, that I can hold this floor almost until doomsday. In other words, I've got a piece to speak, and blow hot or cold, I'm going to speak it."
— Jefferson Smith, Mr. Smith Goes to Washington
Advertisement:

Bob must perform a filibuster for in-universe reasons.

Perhaps he is a politician and must perform a genuine filibuster.note In the U.S. Senate at least, every Senator has the right to talk for as long as they like. Abusing this power by talking without end is a "filibuster". Perhaps he's been cornered by the Big Bad and is pretending to surrender and plead for mercy in the hope that the Big Damn Heroes or The Cavalry will turn up to rescue him. Perhaps The Hero is doing something critical in the next room and Bob has offered to hold the bad guys off or at least hold the attention of the audience. Perhaps two groups in the room each know One Side of the Story and he simply can't let them talk to each other. Perhaps Alice is on next and she hasn't turned up yet, but Bob knows she will if he can hang on for a bit.

What Bob says might be a Character Filibuster but more often he's making it up as he goes, going off on tangents, telling Blatant Lies or rambling. A good opportunity to rattle off exposition. May be a Multitasked Conversation. Possibly Bob can't or won't lie.

Compare Caught Monologuing and We Need a Distraction. May be part of a Scheherezade Gambit. May overlap with Conveniently Timed Distraction if a character stalls for time and hopes for an opportunity. Contrast Talking Is a Free Action. Do not confuse with Hold the Line which involves a lot of physical fighting, though if you throw in Blood on the Debate Floor they might overlap.

After the White House figures out why he's doing this, and that as a result there's nothing they can do to make that vote happen, they recruit just about every grandfather in the senate to come in with questions so he can have a rest.

Paige tasks Owen to stall Mayor Whitebottom until she can find evidence against him before he can find it. Owen does his best, but Whitebottom is able to spin pass him.

Paige tasks Owen to stall Mayor Whitebottom until she can find evidence against him before he can find it. Owen does his best, but Whitebottom is able to spin pass him.