Film / All Through the Night 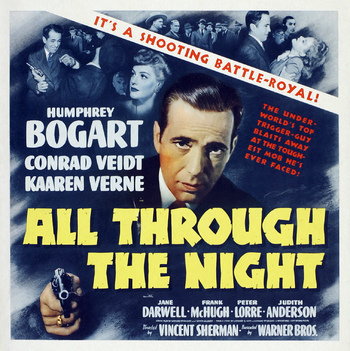 "Gloves" Donahue (Bogart) is a gambler who gets called by his mother (Darwell) when Mr. Miller, who makes his favorite cheesecake, is murdered. When his mother follows Leda Hamilton (Verne), a nightclub singer, because she was asking about Miller, Gloves reluctantly gets involved, only to find himself going up against a group of Nazis (Veidt, Lorre and Anderson) who are planning a major act of sabotage.

Most of the movie takes place over the course of a single night, hence the title.

A startlingly young Jackie Gleason plays one of Donahue's flunkies.