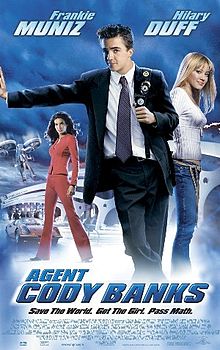 Agent Cody Banks is a kids' spy movie starring Frankie Muniz and Hilary Duff. Cody Banks (Muniz) is a junior CIA agent recruited through a secret CIA summer camp. Due to some exaggerated bragging he did at the camp, the agency mistakes Cody for a Kid-anova and assigns him to "seduce" Natalie Connors (Duff), the daughter of a scientist whose nanobots have attracted the attention of an evil organization. What follows is 25% romantic comedy, 25% spy parody, and 50% straight action movie. It also features Angie Harmon as Cody's handler, Ronica Miles, and Keith David as the head of the CIA. A sequel followed in 2004, entitled Agent Cody Banks: Destination London, and it co-starred Hannah Spearritt (of S Club 7 fame) and Anthony Anderson alongside Muniz.

Executive produced by, among others, Madonna and Jason Alexander (yes, that one).

Tropes in the first movie or the series in general: