And I'm the Queen of Sheba 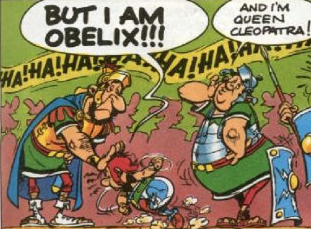 After the volume ended, that legionnaire would soon be dealing with legal name-change procedures and same-name arguments with the real deal too.
Sanjei: Unhand me, peasant. I am Prince Sanjei of Ishkabar.
Delilah: Mm-hmm, and I'm the Queen of Sheba.
Sanjei: Oh, nice to meet you, your highness.
— The Suite Life of Zack & Cody
Advertisement:

Bob: I'm actually the High King Bobertissimus in disguise!
Alice: Yeah, and I'm the Pope on a skiing holiday.

Can lead to interesting results if Bob takes Alice at her word, which may be because he's constitutionally deaf to sarcasm, doesn't expect her to disbelieve him, or doesn't recognize the improbability of her statement. Or Bob may sarcastically reference Alice's statement when his improbable statement is proven true. See Cue the Flying Pigs.

Compare Napoleon Delusion. See also Or My Name Isn't... if the person is secretly who they are claiming to be and only saying it in a sarcastic manner to throw the listener off, it's a Sarcastic Confession.

Alternative Title(s): And I Am The Queen Of Sheba