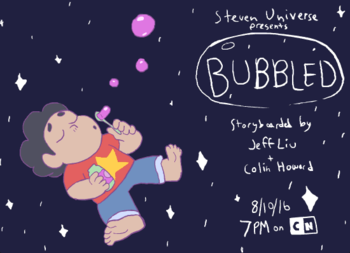 The episode begins with Steven waking up in the middle of space in his bubble, rapidly drifting away from the Moon Base in an uncontrolled and dizzying spin. Soon after, he comes into contact with Eyeball, who is angered at the sight of Steven after her crew has once again been tricked by the Crystal Gems and have now been scattered into space, drifting away from Earth. She is quick to accuse Steven of being responsible for them all being sent into outer space "with no hope of returning." After a short argument, they sit in silence as they float around randomly, Steven being annoyed that although they were passing right by a satellite, he still has no cell-phone signal, remarking that if he returns to Earth, he will be changing his phone's calling plan.

Eyeball begins to monologue about her initial disbelief at the rumors that there could be any remaining Crystal Gems on Earth, wondering about the possible fate of Rose Quartz after all these years, deciding that she must still be alive, as Jasper would have no reason to return to Earth outside of closure in seeing her. Eyeball seemingly shares this same sentiment, wishing to see Rose Quartz "with her own eye," further disappointed that she could not even get any answers from Jasper, who was merely Amethyst in disguise. Steven then attempts to reveal to Eyeball that Rose Quartz had turned into him. However, Eyeball disregards this as simply another trick with sarcastic comments and spite. Steven attempts to show her his gem, but she dismisses this as well, claiming that it is not the proper color (tinted due to her looking through the bubble's pink color at it). He then forms his shield, which also fails to convince Eyeball, who remarks that she remembers Rose's sword specifically. After telling Eyeball that he left it in Lion's mane, he shows her a photograph of Rose's portrait, asking if she does not see the resemblance. Eyeball is angered by this, seeing it as simply more lies and deceit, calling Steven "despicable" for making fun of her as they drift along to certain death, claiming that he is even crueler than Rose Quartz.

Soon after, the duo begins to drift into an asteroid field, with small debris whipping by and bouncing off of Steven's bubble. Eyeball narrowly dodges several of these projectiles, and after colliding and rolling off several larger asteroids, they rejoice that they are both alive, Eyeball claiming that she is unstoppable. Right after this momentary lapse, Eyeball is hit directly in the face by a small asteroid, cracking her gem and sending her careening off of Steven's bubble, seemingly unconscious. Steven extends his bubble to catch her as she drifts away, pulling her back into the main pocket where she awakens.

Her physical form quickly begins to glitch and distort as she struggles out of Steven's grip as he attempts to help her. Eventually, she concedes to allowing Steven to help, and he heals her gem using his healing spit. At the realization that he has healing abilities, she remarks on how Rose Quartz was renown for her abilities, being capable of healing her soldiers' battle damage, keeping the much smaller and under-armed Rebellion in contention with Homeworld's vast armies and technological superiority. This leads her to believe Steven's claims of being Rose Quartz, and the two share a moment of laughter over the predicament that they have found themselves in.

This moment soon fades, however, when Eyeball summons her weapon, a small dagger, and lunges at Steven in an attempt to stab him. Steven extends his bubble after dodging the attack, asking why Eyeball is trying to attack him. She responds that he should not be surprised, as he shattered a Diamond. The two run around the bubble in a chase as Eyeball threatens that she is going to take his gem back to Homeworld. This leads to Steven questioning what would occur if his gem was removed from his body, and the two collide as Steven stops to ponder this. Eyeball quickly pins Steven down as she prepares to dig out his gem, fantasizing about how famous she will be for being the Ruby that took down Rose Quartz, even mentioning that she would be given a Pearl and go down in history for such an achievement. Steven protests this, attempting to tell her that he is not Rose Quartz, merely her son. He tries to reason with Eyeball that even if she removes his gem that it would be impossible for her to get back to Homeworld with it in their current position. As Eyeball disregards this, Steven draws a quick breath and throws Ruby away from him as he drops his bubble. As Eyeball flies away from him, he reforms the bubble around himself, gasping for air and watching Eyeball angrily drift away. He falls unconscious after this, his bubble shrinking around him.

Some amount of time later, Steven's bubble is suddenly caught in the tractor beam of the Roaming Eye, which slowly pulls him into the control room, where it is revealed that during his time in space, Garnet, Amethyst, and Pearl had taken the Roaming Eye to search for Steven. The episode plays without dialogue as "Love Like You" accompanies the four enjoying a tearful, bittersweet embrace. The song fades slightly as dialogue returns, Steven questioning why he was left unaware of Rose having shattered Pink Diamond. Garnet responds that they had all done what they had to during the war, confirming that Rose Quartz was left with no choice but to shatter Pink Diamond, as Earth was under her direct control. She continues with her explanation of Rose's actions, claiming that she did not always do what was best for herself, but rather always did what was best for Earth, even if it meant that someone had to be shattered. The episode then ends on a somber note as Steven comes to acceptance of his mother's actions, thanking Garnet for telling him as the Roaming Eye approaches Earth.

Example of:
And I'm the Queen of Sheba