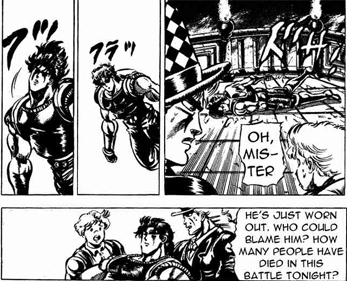 "I firmly believe that any man's finest hour, the greatest fulfillment of all that he holds dear, is that moment when he has worked his heart out in a good cause and lies exhausted on the field of battle - victorious."
— Vince Lombardi
Advertisement:

A character, despite long odds does something awesomely cool. Maybe they get a Heroic Second Wind that lets them survive long enough for the bad guy to give up and leave them alone, or maybe they just won a particularly difficult fight that they didn't think they could win.

But, after the character's sure the danger has passed, he promptly collapses, whether from the stress of dealing with someone who completely terrified him, because he overtaxed his power too much, or just because he got hurt too badly in the fight. If he actually succumbs to his injuries and dies, it becomes a Heroic Sacrifice. Less serious injuries may start the action back up with an After-Action Healing Drama.

This one is frequently used with the Doomed Moral Victor, Heroic Safe Mode, or with I Can Still Fight!. See also similar tropes Heroic RRoD and Power-Strain Blackout. Compare Fainting Seer.

Commonly used so the author doesn't have to write about all the boring clean-up after the battle climax. The hero may last just long enough for The Cavalry Arrives Late, so they can do the clean-up. For more minor injuries, After-Action Patch-Up may suffice to let him out of the work.

May result when the Bottled Heroic Resolve or Super Mode wears off. Often produces Asleep for Days or Deep Sleep. It's common for the character to awake and find themselves Waking Up Elsewhere, with After-Action Healing Drama or Undressing the Unconscious in effect.

Truth in Television, to an extent: Ever felt extremely tired in the hours that follow periods of high stress? This trope is a more significant form of that fatigue; Adrenaline and other stress hormones can enable people to go for a long time, despite their injuries and exertion, only to collapse once the danger is past and the stress hormones wear off.