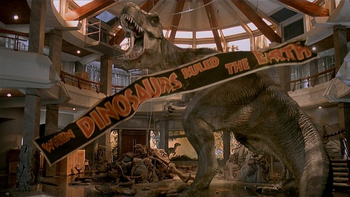 Long live the victorious Queen
With swelling breast, he placed a foot upon the body of his powerful enemy, and throwing back his fine young head, roared out the awful challenge of the victorious bull ape.
—Tarzan, after slaying Sabor
Advertisement:

Victory often floods many a sentient being with a variety of emotions. Occasionally, it's a sense of bittersweet sadness or emptiness, but more enough, it is anything that would fall under the sense of pure triumph. In such cases, some may simply strike a heroic pose. Others, however, might just let out all those pent up emotions built up over the course of the battle into one long and very loud scream.

Such cries can have a multitude of benefits, beyond just emotional release. Animals in general, or animalistic characters and Kaiju in particular, will do this as a final assertion of their dominance, be over territories, mates, or a gentle remainder to any other observing species that their beloved human(s) are under their protection. For the decidedly more sapient and/or heroic characters, it can be a huge morale boost for their allies, perhaps going so far as to imbue them and the audience with a sense of things going right and that the opposing evil will be defeated forever.

Of course, if on the rare occasion it's a villain who does the roaring after emerging victorious, the best any of the characters can hope for is that it's a simple intimidation tactic against the hero's remaining forces and allies, though the audience will probably know in that moment that it'll be a ''long'' time before the heroes will rally themselves again. If they ever do.

Nonetheless, it's undeniably awesome every time such a roar happens, especially when it's accompanied with a great soundtrack. Sometimes a little funny, too, if the audience gets in on it.

A Screaming Warrior, regardless of moral affiliation, will probably be the most frequent character in any given work to invoke this. Overlaps with Signature Roar, obviously since it's unlikely the characters will have different vocalizations that only show up after winning a battle. If both tropes are in play, this only needs to apply if the character shouts/roars/etc. whenever they win a fight. May also overlap with Skyward Scream and Big "YES!". If the roaring creature has a humanoid form, they may perform a Primal Chest-Pound at the same time.

A Sub-Trope of Mighty Roar. Compare to Victory Pose. Sister trope to Victory Quote, as a Victory Quote in All Caps usually implies and/or leads into this. See Clifftop Caterwauling if the character is standing atop a cliff/mountain/etc. Contrast Roar Before Beating and Kiai.

Given that this trope can only occur after a fight, no matter how downplayed the example might be in and of itself or within the context of the characters and work in question, and likely result in the deaths of other characters, this is spoiler heavy territory and spoilers WILL be unmarked. You have been warned!