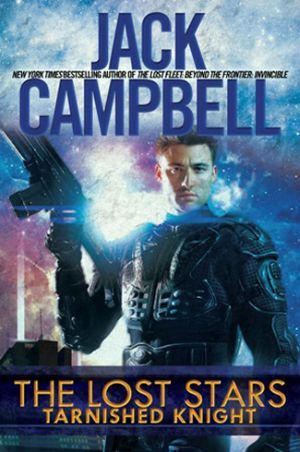 The Lost Stars is a hard SF series by Jack Campbell, a spinoff of his The Lost Fleet series. Taking place shortly after the end of the Alliance-Syndicate War, the Syndicate Worlds have begun collapsing following their defeat in the war. In the star system of Midway, two Syndicate CEOs, Gwen Iceni and Artur Drakon, revolt and free their system from the Syndicate Worlds. It's an uphill struggle but they do have some things going for them. They have the (compromised) loyalty of their subordinates, the (mercurial) consent of the citizenry, and, most importantly, the (tepid) support of Black Jack, the godlike entity who single-handedly brought the Sydicate Worlds to its knees. Working together while always suspecting one is about to double cross the other, the face issues of controlling Midway themselves, and how to alter its oppressive practices, and defend it from the aliens only a star system away.
Advertisement:

Not to be confused with Lost Stars, which is a Star Wars novel.