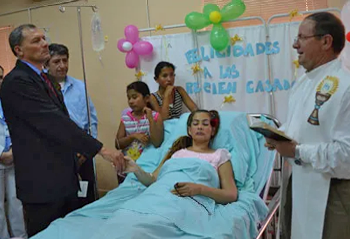 The act of moving up a wedding date due to extenuating circumstances.
Advertisement:

For some reason the wedding needs to occur sooner rather than later. Common versions include Elopement, when the parents oppose the marriage, and the Star-Crossed Lovers need to make it official before the parents stop them. Might start with a Perilous Marriage Proposal. The exact opposite justification is the Shotgun Wedding, when the parents insist on the lovers marrying, usually because "My daughter is not a slut" or even more serious, a baby is on the way. Might be considered a Dead Horse Trope in these versions nowadays.

It can also be a very moving and realistic event; either in a war movie (still a Truth in Television trope, but due to Values Dissonance between Hollywood and the Heartland, it isn't seen much anymore), or in some cases someone very close to the bride and/or groom is dying, and everyone agrees to move up the wedding so they can live to see the couple get married.

For some cases where a wedding was rushed because the couple wanted to, see My Own Private "I Do". Can lead to a Wartime Wedding and may be a Last Wish Marriage. If the couple can't get the official wedding, they might opt for an unofficial, deeply felt wedding-like private ceremony that leads to Metaphorical Marriage. Contrast Wedlock Block.

If the actual ceremony is sped up, see Skip to the End.