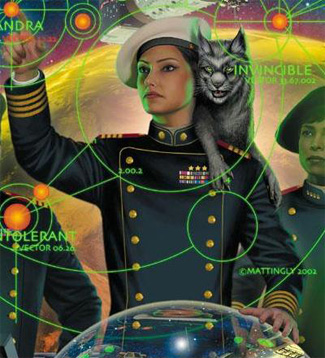 No matter the size of your space navy, do not mess with Lady Harrington, her crew, her star nation, her family and especially her 'cat. The 'cat will cut you.
"Let's be about it."
Advertisement:

Honor Harrington is a Military Science Fiction series by David Weber. The book series is mainly set around the adventures of the titular heroine, although we see a fair amount of the wider universe. The primary conflict of the storyline is the Star Kingdom of Manticore (The Good Guys) vs. The People's Republic of Haven (The Bad Guys Who Aren't Entirely Unsympathetic).

Weber has explicitly described the series as "Horatio Hornblower" IN SPACE! with the series being a great deal more focused on (Space) Naval operations than other science fiction series. Honor Harrington occasionally performs ground-based and political adventures, but the vast majority of the series is focused on her ship-to-ship conflicts, where she serves as commanding officer. However, like almost all Long Runners, the story's scope has expanded a fair bit, with an increase in moments when Honor isn't "on-screen," and other prominent supporting characters have taken center stage at various points.

The series is notable for the low level of Artistic License – Physics, and thus the above-mentioned space battles are entirely unlike anything seen on Earth. For example, once a ship builds up some velocity, it keeps going unless it boosts in the opposite direction, which takes longer the greater the velocity is. This has major implications in combat.

Several spinoff series have been published, two to expand on current events within the series, and two looking at the early years of the Star Kingdom of Manticore. In the first set are Saganami Island and Wages of Sin. In the second is the Stephanie Harrington Young Adult series, centered on one of Honor's ancestors, and Manticore Ascendant, written by Weber and Timothy Zahn, with assistance from Tom Pope of BuNine. There are also several short stories, anthologies, universe information books, and games and other media based on the series.

Brief Synopses of the Books

The main-line novel series, primarily following the adventures of the titular character and events on and around Manticore, as well as those in the (People's) Republic of Haven and the Protectorate of Grayson. Among others.

The Torch sub-series, following events on and around the planets of Torch and Mesa, and the adventures of Victor Cachat and Anton Zilwicki.

The Talbott Quadrant sub-series, following events in and around the Talbott Quadrant close to the Lynx terminus of the Junction, and the assorted adventures of Michelle Henke, Aivars Terekhov, Augustus Khumalo, Estelle Matsuko, Abigail Hearns, and company.

The Young Adult sub-series, focused on Honor Harrington's ancestor Stephanie, the first human to be bonded to a treecat, and her life on Sphinx — set about four hundred years before the main series.

The Manticore Ascendant series is set during the same era as the Stephanie Harrington books, before the discovery of the Manticore Wormhole Junction. It is a prequel series co-written by Weber with Timothy Zahn and Thomas Pope, which chronicles the early days of the Royal Manticoran Navy as it begins to explore the galaxy outside the Manticore System.

A number of anthologies have been published. Some stories extend on the books, some are stories about individual characters and some are Worldbuilding. Multiple authors have contributed to them, most prominently Eric Flint, Timothy Zahn, Jane Lindskold, and John Ringo.

All the novels up to A Beautiful Friendship are legally available for free, along with many other Baen Books titles, via the Baen Free CD site

. The best collection of Honorverse titles is on the Mission of Honor promotional CD that was included with the hardback.

A tie-in graphic novel series called "Tales of Honor", covering the events of On Basilisk Station did get released, along with a game for mobile devices.

Warning: Spoilers ahead. As a Long Runner, Late Arrival Spoilers of the early books are unavoidable. Caution advised.