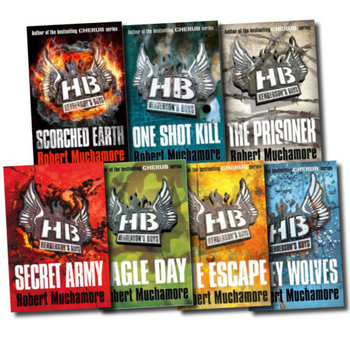 A British spy series set in World War II. Henderson's Boys concerns the activities of the last active British agent in Nazi-occupied France, and the children he adopts/recruits to assist him. It's sold as a prequel to the author's bestselling Cherub Series, but has a significantly darker tone and a very different setting. Main characters include Charles Henderson, an adult British spy, Marc Kilgour, a young French orphan, Paul and Rosie Clarke, who are British kids orphaned in the first book, and PT Bivott, a young French American thief that fled American for France, only to arrive in time for World War II. Other agents are added in Secret Army, including Luc, Joel, Troy, Sam and Yves.

The books try to keep things fairly realistic, and is very much in the Stale Beer category of Spy Fiction. There are no over the top supervillains that can only be defeated by bullet dodging tux wearing super spies. The series makes it clear that one mistake, one stray bullet, or one unlucky event could doom the entire group.