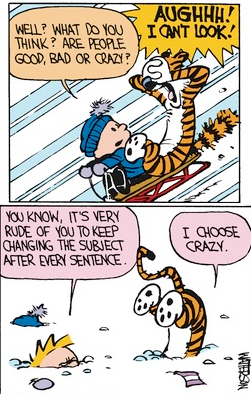 WUMP!!
"I think we're all mentally ill; those of us outside the asylums only hide it a little better (and maybe not that much better after all)."
— Stephen King, Danse Macabre
Advertisement:

A thread sometimes seen in Sci-fi, is that humans - all of us - are several cans short of a six pack. It could be the emotional drive that overrides logic, or more of a "What were they thinking?!" when aliens watch us go about our day, but when looked at compared to all the races in space, Humanity is bonkers. This can be to our advantage, as a sane race would never even consider trying to sneak into the fortress dressed up as pizza delivery men. What really drives other races crazy is that it sometimes works.

This also makes it very difficult for Humans to be mind-controlled, for as soon as the Puppeteer Parasites get inside, they realize how nuts we are and flee, or are driven insane by the hosts.

Of course, other species might seem just as insane to humans.

On the other hand, it may just be the reason Humans Are Special.