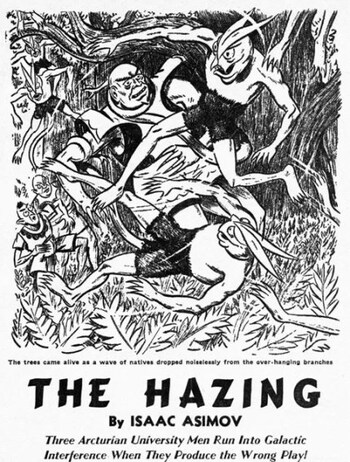 First published in Thrilling Wonder Stories, (October 1942 issue) by Isaac Asimov. This story is a sequel to "Homo Sol", written after "The Imaginary" but published a month beforehand.

Two sophomores from Arcturus University, the most prestigious college on the planet Eron, are fighting off the boredom of summer vacation courses. Myron Tubal, of Arcturus System, and Bill Sefan, from the Vega System, are greeted by their friend Wri Forase, from the Deneb System. Forase is bubbling over with excitement; ten freshmen from the Sol System have just arrived! It doesn't take long until Tubal proposes a bit of fun to welcome the new species to Arcturus University.

Albert Williams is the last one of the Earthmen kidnapped in the middle of the night by aliens unknown. Now that they're all together, they conclude that the only reasonable explanation for their being forced into the cargo bay of a spaceship is a hazing.

The aliens drop off the humans during the middle of the local night in a dense forest, warning of the pre-Faster-Than-Light Travel natives in the area. They leave the Earthmen with wood and weapons, but don’t say how long they'll be left there. The aliens depart, and congratulate themselves on the hazing. Unfortunately, a badly timed meteorite breaks through the shields and damages the spaceship. It takes several days to fully effect repairs and they make haste to return to the humans, but eight days have passed since they were left.

The Humanoid Aliens land the ship and search in embarrassment for clues about what happened to the Earthmen left behind.

No connection to the 2004 horror film.

"The Hazing" provides examples of: