Too Incompetent to Operate a Blanket 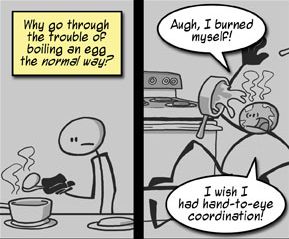 "First, there is the sequence where someone is shown trying to unsuccessfully impale the cap of a normal pen, which suggests not only a lack of familiarity with pens, but also the visual-spatial reasoning ability of a pot-smoking chimp."
— Cracked.com "The 10 Most Laughably Misleading Ads"

There are people in this world who take incompetence to an art form. You know who we're talking about: people who cannot be trusted to use scissors, cut themselves to ribbons when they try to use a potato peeler, and cannot even use a blanket without help. How can such utterly incompetent people make a living in this world?

By appearing in commercials!

You see, for Task [X] (say, cutting paper), performed previously by using The Old Way (a paper-cutter, or, for added angst, scissors), there is someone trying to sell you a new PaperSlicerMax 3000, capable of doing the same thing. The new product has to be better than the Old Way if you want to convince an audience to throw out their old tools and buy new ones. All too often, the appearance of improvement is provided by showing the previous tool being used by someone so ridiculously clumsy and uncoordinated that it defies belief. What better way to advertise a new paper cutter than to show someone trying to use scissors and reducing their paper to modern art? Or, say, some idiot who cannot fold a map, to make GPS navigators look so much more efficient?

A popular format is to have the narrator say "stop wasting your time with conventional blankets", and showing a big red X or "no" slash over a typically monochrome and/or heavily desaturated video of someone apparently having a lot of trouble with it, or someone tossing it down and shaking their heads melodramatically. Bonus points if these conventional products cost thousands less in the long run. Expect Bad "Bad Acting" to be used to demonstrate frustration. Often the same person becomes dramatically more competent when they switch to the product being advertised — the idea is presumably "even a moron could use our product", but often comes across as "only a moron would need our product".

Let's face it, this could be Truth in Television for some products and indeed, some users. In reality, however, many of these products were invented specifically for the elderly and physically disabled, people who legitimately could have problems with some of these tasks; the "being too incompetent to use it" factor usually arises when the item is marketed to a general audience (needed in order to secure a big enough market to make the product profitable) and it becomes necessary to convince able-bodied people that they can't live without these products. So instead of showing the situations where the item could actually be useful, advertisements depict youngish adult actors of sound mind and body acting completely goofy...and inadvertently casting a negative light on the people who might have a legitimate need for the product.

Sometimes goes hand-in-hand with The Power of Cheese, which is people acting incredibly stupid due to desire for the product being advertised instead of as a "demonstration" of a competitor. Related to Brand X, Cable/Satellite Mudslinging, and Side-by-Side Demonstration. May be used to cover up a Never Needs Sharpening flaw. Basically Disastrous Demonstration invoked for marketing purposes. Compare Deceptively Simple Demonstration, where the product is being used in a way that looks harder than it really is. It doesn't help that with few exceptions infomercial products are low-quality examples of their product type being pushed at a markup.

A Sub-Trope of Strawman Product. This may overlap with Lethal Chef if the product in question is related to cooking. Compare Viewers Are Morons.

Compare and Contrast Modeling Poses (when people do their best to make a product look good).

Alternative Title(s): Cannot Operate A Blanket, Too Incompetent To Use A Blanket