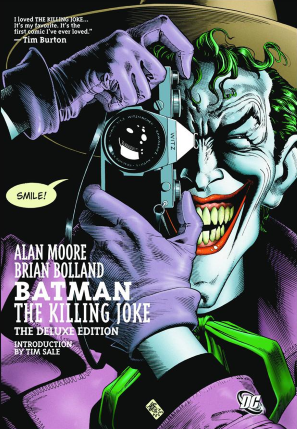 There were these two guys in a lunatic asylum...
"All it takes is one bad day to reduce the sanest man alive to lunacy. That's how far the world is from where I am. Just one bad day. You had a bad day once. Am I right? I know I am. Why else would you dress up as a flying rat? You had a bad day and it drove you as crazy as everybody else...only you won't admit it! You have to keep pretending that life makes sense, that there is some point to all this struggling! God, you make me want to puke."
— The Joker
Advertisement:

The Killing Joke, first published in March 1988, is a one-shot graphic novel written by Alan Moore and drawn by Brian Bolland. The novel tells one possible version of the story of how the Joker became the Joker in flashback, while simultaneously telling the present-day story of Batman attempting to convince the Joker to end their feud once and for all, only to be immediately sprung back into action after the Joker ensnares Commissioner James Gordon and his daughter Barbara (Batgirl) in a horrific scheme.

Considered by many to be the definitive Joker story and one of the best Batman stories ever published, The Killing Joke has influenced or been incorporated into a considerable amount of Batman media. Among the noteworthy aspects of the novel's characterization of its two foiling lead characters are its thematic focus on the similarities and differences of the characters, which Batman directly acknowledges while contemplating their relationship throughout the story, as well as the portrayal of the Joker as a Tragic Villain.

The comic won the Eisner Award for "Best Graphic Album" in 1989 and appeared on The New York Times Best Seller List in May 2009.