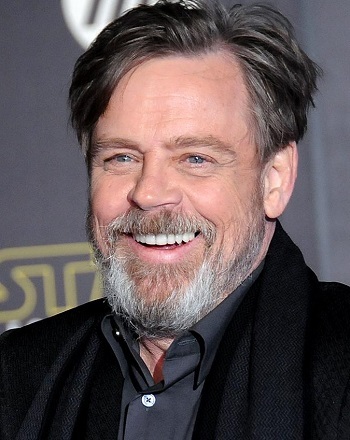 "One of the things that I love about voiceover is that it's a situation where — because you're not encumbered by being seen — it's liberating. You're able to make broad choices that you would never make if you were on camera."
Advertisement:

Better known as Luke Skywalker, The Joker, Fire Lord Ozai, Colonel Muska or Christopher Blair, Mark Richard Hamill (born September 25, 1951) is an American actor who was considered one of the best young talents in The '70s.

Though praised for a strong performance as Luke Skywalker in the Star Wars franchise, he could never match the success of his most famous role. Despite being typecast, he was frequently in demand and performed in several lesser known films before turning more to theater (not just to pay the bills, but because he preferred it), eventually getting juicy lead roles in big plays on Broadway like Amadeus and The Elephant Man. (Actors who had seen his performances include Jackie Gleason, Christopher Walken, and even the great Katharine Hepburn, who met Hamill backstage.)

He has also become one of the most acclaimed voice actors in the industry. He's best known for playing dynamic, outright evil villains (ironic, considering his previous typecasting as a hero fighting against The Dark Side) in animation, most notably The Joker as stated earlier — many consider him to be the definitive interpretation of the character. He's actually a swell guy in real life, despite the typecasting.

There is a persistent story about Hamill being in a severe car accident that caused serious facial injuries that required reconstructive surgerynote the more fantastic rumors claim that he suffered severe facial paralysis and many believe it's why his character is all banged up early in Empire Strikes Back. Hamill refutes this, saying he just suffered some scratches and a broken nose and he doesn't understand how the incident was blown so out of proportion. It is, however, why he resembled a Ken doll in the infamous The Star Wars Holiday Special, as the accident happened not long before.

His career came full circle in 2014, where he lent his villain-voicing expertise in Star Wars: The Clone Wars as Darth Bane, and then it was announced he'd reprise his role of Luke Skywalker in the Disney-produced sequel trilogy starting with The Force Awakens, and he then reprised his role as the Trickster in the CW Flash series. All of which has earned no small amount of critical acclaim and the Darth Bane role even got him an Emmy nomination. Life is good for everyone's favorite Jedi, it seems.

accounts, which are often filled with hilarious stuff.

The Trickster's leitmotif is an eerie music box remix of his theme from the 90's Flash series.

The Trickster's leitmotif is an eerie music box remix of his theme from the 90's Flash series.