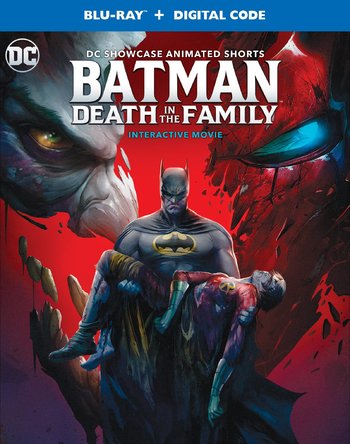 "Joker showed me the truth. Evil can't be cured, only killed."

Robin will die because the Joker wants revenge. But you can choose to save him.

DC Showcase – Batman: Death in the Family is a 2020 entry to both the DC Universe Animated Original Movies and the DC Showcase sub-series. Unlike other entries, this is an interactive movie with different paths. It is an adaptation of A Death in the Family, an expansion of Batman: Under the Red Hood and probably a few other things as well. It is also the first Batman film to be released following the DC Animated Movie Universe franchise's conclusion.

Jason Todd was Batman's second Robin. Brash and headstrong, Jason would butt heads with Batman over certain moral choices. When word got out that the Joker might have gotten a hold of nuclear weapons, the two go in search of him. Jason found the Joker, but was swiftly captured, tortured, and left to die from a bomb explosion in a warehouse by the Clown Prince of Crime. Jason would die and be resurrected as the Red Hood.

...But what if you had a hand in changing destiny?

In this movie, viewers will have a hand in forging Jason Todd's fate. Will he live or will he die? Should he live, would it be at the hands of the Caped Crusader, or will he cheat death? What will become of Jason should he survive? It's all up to you.

While the Blu-ray version includes the fully-interactive, extended-length Batman: Death in the Family film, the Digital version features a non-interactive, pre-assembled version of the story, entitled "Under the Red Hood: Reloaded", and three other non-interactive versions of the movie's scenarios entitled "Jason Todd's Rebellion", "Robin's Revenge" and "Red Hood's Reckoning" as bonus features. However, not all possible scenes from the Blu-ray version will be included in the pre-assembled versions, so the Blu-ray will have about five minutes of additional content. Additionally, not all digital retailers will include the bonus features, meaning the other three pre-assembled versions.note To the consternation of many who missed this bit. For instance, Amazon Prime and Google Play only have the Under the Red Hood option, while iTunes and the Microsoft Store have all four.

Four other DC Showcase shorts are bundled with it: Sgt. Rock, Death, The Phantom Stranger and Adam Strange.

and one of the story paths can be previewed here.

Tropes Used In This Movie: