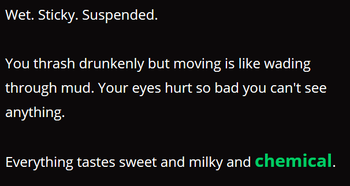 The second screen of the game. The first is just the word "Wet."
Advertisement:

Cyberqueen is a 2012 sci-fi/horror Interactive Fiction game by Porpentine. It begins with a well-worn trope: the protagonist wakes up from suspended animation in a starship. As she investigates her surroundings, it becomes clear that something is wrong aboard the ship. She is all alone.

Alone, that is, except for the Cyberqueen.

While the game is controlled solely by clicking links in an all-text interface, it makes use of various effects, such as timed delays and judicious use of colour, to increase the atmosphere.

, if you have the stomach for it.

The following tropes can be found in this game: