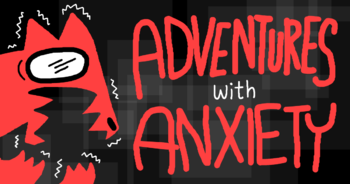 Adventures with Anxiety is a short interactive story by Nicky Case about a person and their anxiety, which takes the form of a big red wolf. However, the player doesn't take the role of the human; they play as the anxiety, which just thinks of itself as a guard dog, trying to warn their master of possible dangers. It can be played for free here