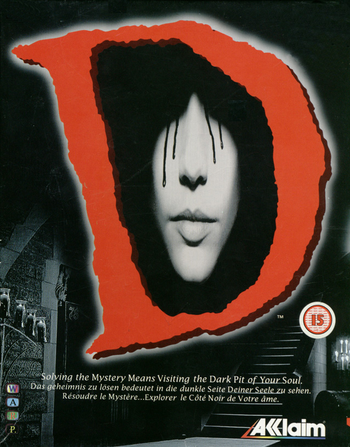 Solving the Mystery Means Visiting The Dark Pit of Your Soul.
Advertisement:

In the mid-nineties, inspired by the rise of Full Motion Video and the concept of treating video games as interactive movies, Kenji Eno decided to take what he deemed the next logical step: creating a digital actress. Laura would go on to star in three games, portraying a different character with a different surname each time:

After D2's commercial failure, its developer, WARP, folded, bringing Laura's career to an end. However, the original D is available digitally on both Steam and GOG.com under the title D: The Game as published by Nightdive Studios and Throwback Entertainment.

The D Trilogy contains examples of: