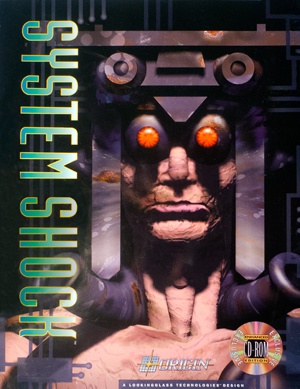 L-l-look at you, hacker. A p-p-pathetic creature of meat and bone, panting and sweating as you r-run through my corridors-s. H-h-how can you challenge a perfect, immortal machine?
— SHODAN, System Shock trailer
Advertisement:

System Shock by Looking Glass Studios was a groundbreaking First-Person Shooter/Immersive Sim with Survival Horror and RPG Elements set in a Cyberpunk future. It wasn't exactly a smashing success in sales, but it was massively influencial and spawned one of the most memorable villains in all of video games. A sequel, System Shock 2, was released in August 11, 1999.

"The Hacker," caught breaking into the mainframe of a Mega-Corp, is offered a chance at freedom and a prime-grade neural interface in return for performing nonstandard modifications to the Sentient Hyper-Optimized Data Access Network (SHODAN), the AI on the corporation's space station. After the six-month coma needed to heal from his surgery, the Hacker finds that SHODAN has gone haywire from having her ethical controls removed, and has transformed the entire crew into cyborgs and mutated monsters devoted entirely to her. The Hacker must stop SHODAN from destroying the earth and wipes her completely from the database. The game is notable for being a story-driven action game at a time when this was not the norm, as well as being extraordinarily high-tech for its time.note The maps are true multi-leveled, and the world is rendered in full-3D polygons. It also has angled floors, like ramps - ie; the walls and floors aren't all at 90 degrees to one another, so you can be walking down an octagon shaped corridor, for example. Although sprites were used for smaller objects, larger objects were 3D, were fully destructable, and could be stood upon. It also had a really slick physics system: objects you throw bounce off the walls and roll down inclines, if you shoot a robot on a ledge it may fall off (and even crush another robot below), and the player can jump, crouch, crawl, lean, dodge, or do combinations of those. Objects can be pushed, picked up, and thrown. The game features dynamic lights that can pulsate or be toggled on and off. Doors and bridges can be translucent. These don't seem like much now, but the game was considered mind-blowing at the time; it could do everything other games at the time (up to and including Quake) could do and more, with the exceptions of liquid physics and 16-bit color.

version, with an added mouse-look feature and DOSBox emulation, until the new copyright owners demanded the downloads to be taken down. It took Nightdive Studios years to solve this new predicament, but ultimately obtained the rights to the game and released an Updated Re-release titled System Shock: Enhanced Edition

on GOG.com on September 22, 2015, and on Steam one month later. The Enhanced Edition runs natively in Windows and incorporates features from Portable and other mods, including remappable keys, mouselook support and enhanced graphical resolution, and also solves some of the bugs of the original. Those who would rather enjoy the classic in its original form need not fret, though, since the Enhanced Edition also includes the original version with no enhancements, titled System Shock Classic. The patches the were used in Portable where later made into a separate patching tool for the original game, aptly named "System Shock Portable Tool". In 2018, the Enhanced Edition was ported to Nightdive's KEX engine, allowing for smoothed, hardware accelerated graphics (allowing for variable FOV and widescreen and even ultra-widescreen) and porting in higher resolution character portraits from the Mac version.

In November of 2015, Nightdive Studios has acquired full rights to the System Shock franchise

and announced a full remake of the game

, originally set for a mid-2018 release after a successful Kickstarter campaign, but later pushed back to 2020 after encountering some difficulties with their direction. They also thought of making System Shock 3, but instead got outside help in the form of Otherside Entertainment, composed of ex-Looking Glass developers, who revealed that they would be developing it themselves on the 15th of December 2015

with Starbreeze Studios acting as publisher. However, Starbreeze got into severe financial troubles after Overkill's The Walking Dead flopped and was forced to sell publishing rights for the game back to Otherside in Febuary 2019

Example of:
Call a Human a "Meatbag"