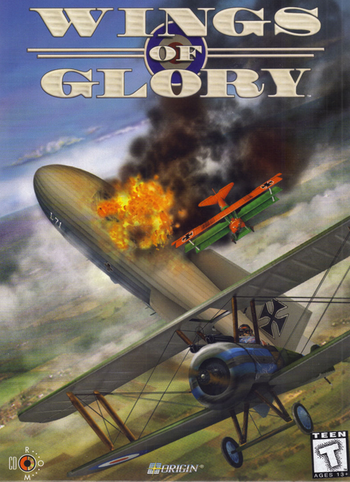 "World War I has been raging since August of 1914. Over 4 million dead. 11 million wounded. 4 million missing or captured. Only a brave few could rise above it. To battle man to man, on fragile wings of glory."
—Game's opening cutscene
Advertisement:

Wings of Glory is a World War I combat flight simulator video game for DOS PCs, developed by Origin Systems and published by Electronic Arts in 1994. The game uses Origin's custom made Realspace engine, which was first used in their earlier flight simulator, Strike Commander.

The game uses essentially the same framework as Origin's successful Wing Commander franchise, in which the player controls a pilot and goes through the course of a war, flying missions and interacting with members of his squadron between sorties. Wings of Glory features highly customizable realism options, the ability to earn medals and promotions based on game performance, as well as a "killboard" in which he can compare his air-to-air kills with the other squadron members.

Very similar to Wing Commander in many regards, it is distinguished by its more realistic nature due to it taking place in a real historical war rather then a science fiction setting. News broadcasts and squadron members will announce and talk about real historical events, while the course of the war plays out exactly as it did in real life. Also, the entire fate of the war isn't resting on solely on the player's shoulders in this game. In fact, you can fail every mission and the Allies will still win the war at the end.

The game has three different game modes: A custom mission editor, an "iron man" mode in which the goal is to rack up the highest possible score against endless waves of enemy planes, and a story-driven campaign in which the player's takes control of an American volunteer who joins the Royal Flying Corps in 1917 and eventually transfer's to the US Army Air Force following America's entry into the war. The campaign contains 40 total mission, 25 with the British and 15 with the Americans.