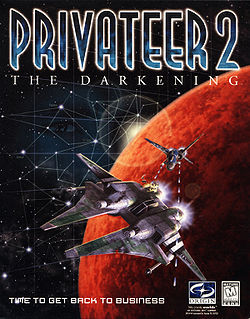 Be Han Solo, except not!
Advertisement:

Wing Commander: Privateer is an adventure space flight simulation computer game released by Origin Systems in 1993. Privateer and its storyline is part of the Wing Commander series. Privateer had an add-on titled Righteous Fire (1994) that continues the story and adds other purchasable equipment to the game. The game was followed up by a full-motion video sequel called Privateer 2: The Darkening.

The player takes the role of Grayson Burrows, a "privateer" who travels through the Gemini Sector, one of many sectors in the Wing Commander universe. Unlike Wing Commander, the player is no longer a navy pilot, but a freelancer who can choose to be a pirate, a merchant, a mercenary or any of the above in some combination. The player may follow the built-in plot but is free to adventure on his own, even after the plot has been completed.

Burrows' name was unknown to the general public for many years. During that period he was known as "Brownhair", by reference to "Bluehair", the Wing Commander I and II protagonist later known as Christopher Blair.

In Privateer 2: The Darkening, you're in a distant corner of the Confederation far into the future. As an amnesiac with a Dark and Troubled Past, it's your job to figure out who you are, and why so many are trying to kill you, while getting tangled up in the politics of the Tri-System.

These games contain the following tropes: