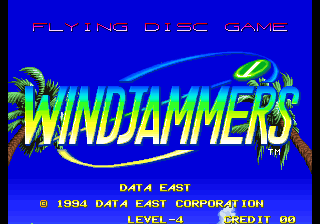 Windjammers (or Flying Power Disc in Japan) is a Sports Game developed by Data East in 1994 for use on the Neo Geo. It is a fast-paced game of frisbee, but with special moves and the ability to score goals, à la Pong or air hockey. It features six unique characters with equally unique abilities from many countries in the world to see who is the best of the best. Ever since Giant Bomb played it on their Extra Life 2013 livestream, the game has skyrocketed in popularity, leading to a re-release of the game by DotEmu on the PlayStation 4 and PlayStation Vita in 2017, and Nintendo Switch the year after.
Advertisement:

A sequel, Windjammers 2 was released by Dotemu for Nintendo Switch, PC, PlayStation 4, PlayStation 5, and Xbox One on January 20, 2022.